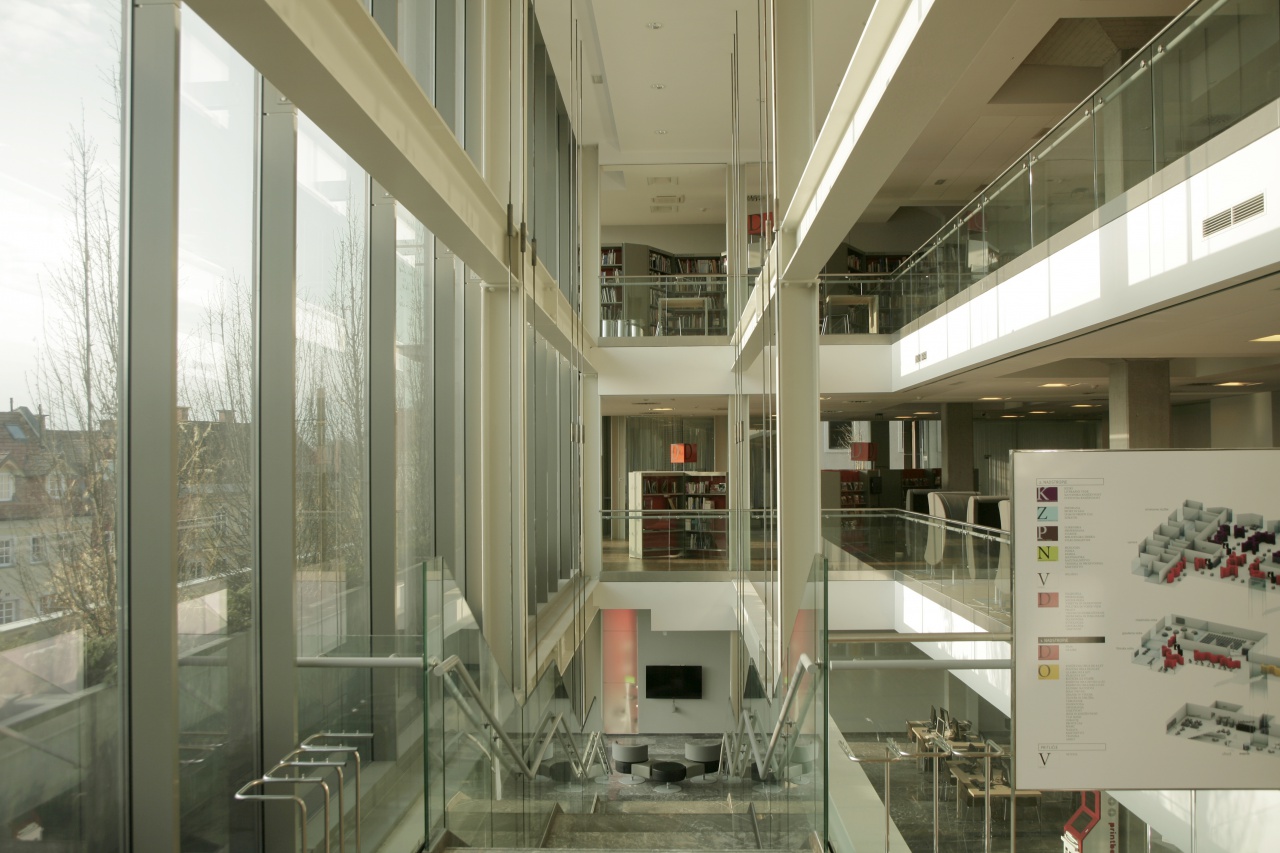 Established in 1960 with the merging of two existing city libraries, the Kranj City Library serves as a regional library as well as a cultural and information centre for the wider Gorenjska region (it consequently boasts a comprehensive and ever-growing collection of books and multimedia items on the region and its people).

In addition to managing branches in Stražišče, Naklo, Preddvor, Šenčur, Cerklje na Gorenjskem, and Jezersko, it also runs so called mobile library stations at five further peripheral locations. The Library Association of Gorenjska is also based at its premises. In 2011 the library moved to newer, state-of-the-art premises in the city centre.

Kranj City Library is notable for its collection (called Prešerniana) of various editions of works by the renowned Slovene Romantic poet France Prešeren (1800–1849), who for a period of time lived in Kranj. There is also a very broad array of secondary literature on him, with the goal of building a complete selection of works on and by this artist.

Additionally, there is also a collection of antique books with about 500 hundred pieces that include such important works as Jurij Dalamtin's Bible (1584) and the original copy of Janez Vajkard Valvasor's most famous work Die Ehre des Herzogthums Crain [The Glory of the Duchy of Carniola] from 1689, a monumental work of at least 3,532 pages on the late 17th-century Carniola.

Furthermore, there is yet another 500 pieces set, this one featuring various bibliophile book editions.

Kranj City Library hosts various events that range from literary evenings, book clubs, story-telling hours, and author presentations to visual arts exhibitions, educational courses and creative workshops. It is especially active in screening film and for this it collaborates with the likes of Animateka Festival, the Film Mixer Independent Film Festival and the Slovene Film Archives.

The library has a set of (stationary as well as tablet) computers freely available for use. There is – for registered members – also a room dedicated to listening to music by audiophile technology as well as a room where small groups can (with upfront reservation) watch films by their choice. There are three (play)rooms for children of different age groups, with one fo them being a provisional gallery space.

One of the services offered is also the digitisation of VHS tapes, done for a very small fee.

The building where the library is now stationed is called Globus. Built in 1971, it was set to be a modern department store with a car park on the 3rd floor. Designed by the famed Edvard Ravnikar, it is one of the most prominent examples of Slovene architectural modernism. Its front façade consists of striking, Corten steel panels that give of the appearance of rust. The building is enlisted in the register of immovable cultural heritage.

The renovation plans, set out by API Architects, retained most of the building's spatial logic. However, they nevertheless very decidedly followed the idea of a library being the most open, even democratic public institution in the city and adapted it very much to follow this perceived role. To this end, the east part got enlarged, with the façade was done in glass. 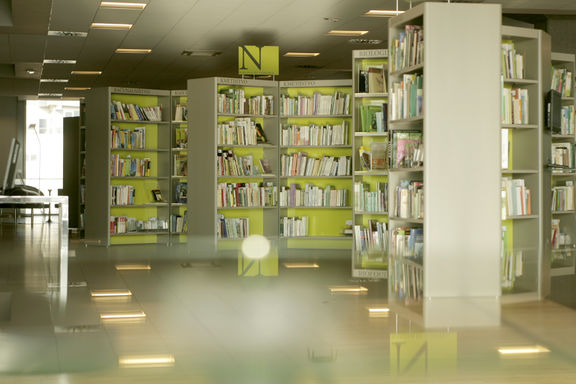 The collection of the Kranj City Library, 2013 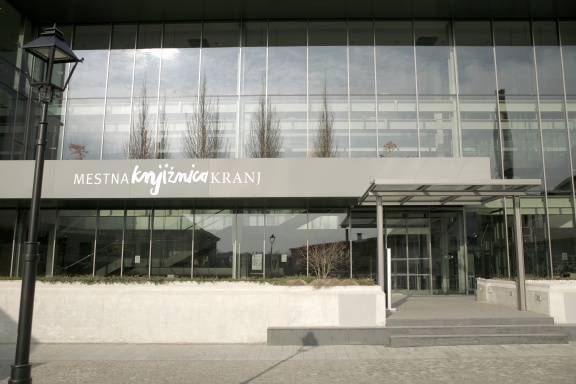 The entrance of the Kranj City Library, 2013 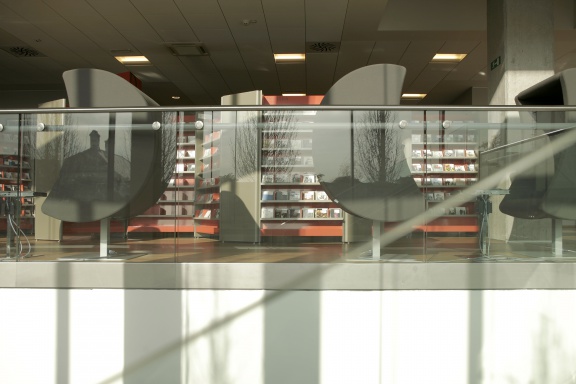 The music collection of the Kranj City Library, 2013 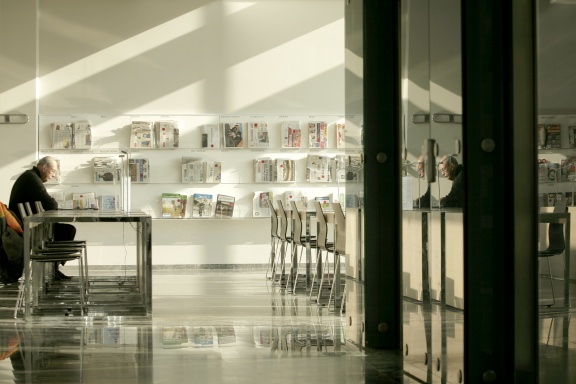 The reading room of the Kranj City Library, 2013 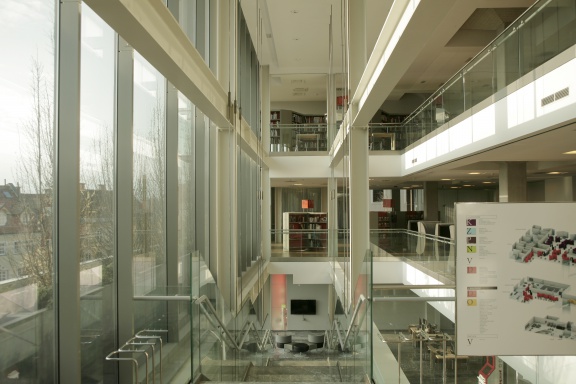 +
Logo url
http://www.culture.si/images/7/70/Kranj City Library (logo).svg +
Lon
14.356 +
Map
http://www.openstreetmap.org/?lon=14.35616&lat=46.24196&zoom=17&layer=mapnik +
Post
SI-4000 Kranj +
Region
SI-4 +
Role 799
Director +
Street
Gregorčičeva ulica 1 +
Teaser100
Established in 1960 with the merging of tw … Established in 1960 with the merging of two existing city libraries, the Kranj City Library serves as a regional library as well as a cultural and information centre for the wider Gorenjska region (it consequently boasts a comprehensive and ever-growing collection of books and multimedia items on the region and its people).media items on the region and its people). +
TeaserImg