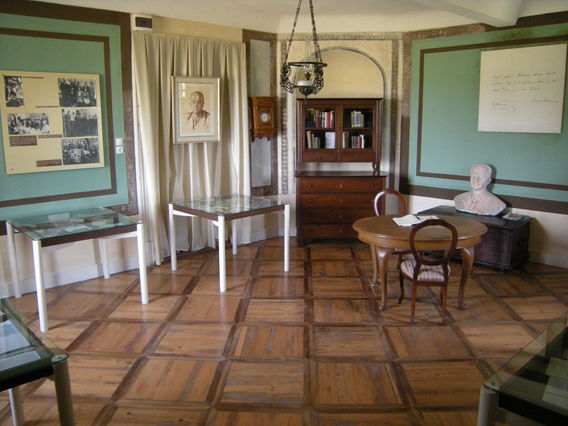 The Louis Adamič Memorial Room is housed in Praproče, the birthplace of Louis Adamič (1898–1951), a Slovene writer who spent most of his life in the USA after emigrating there in 1913 at the age of 14. Known in the United States as Adamic (a-dam'ik), his literature dealt with the social and political issues of both countries (for example, Dynamite, The Native's Return, The Eagle and the Roots).

The collections of Adamič's legacy are dispersed throughout various archives in Slovenia and the USA. The most important is the one at Princeton University (books from his own library, manuscripts and correspondence, clippings). In Slovenia, the memorial room is placed in the tower of the country mansion in Praproče, where Adamič spent his childhood.

The Louis Adamič Memorial Room was established in 1956 by the Slovene Emigrant Association. A collection consists of the copies of his books (both English language and translated into Slovenian), several issues of the Bulletin of the United Committee of the South-Slavic Americans (published by Adamič in NYC in the 1940s) as well as some personal belongings. In the mid 2010s the displayed exhibits were transferred to the Grosuplje Library due to the building's poor condition. The library holds also some of the writer's correspondence and other documentation, mostly donated by his younger brother France.

View of the building where Louis Adamič's Memorial Room is placed.

Louis Adamič Memorial Room is located in the tower of this building where Adamič lived as a child. He emigrated to America at age 15 shortly after being expelled from school for taking part in student demonstrations against the ruling Austrians

Cabinet in the Louis Adamič Memorial Room in Praproče, the collection consists of copies of his books, and other important publications including a political bulletin published by Adamič in NYC in the 1940s, as well as some personal belongings

Plaque at the Louis Adamič Memorial Room commemorating Adamič [1899-1951]a noted Slovenian author journalist and political activist, who became an American citizen in 1918. The most important collection of his work is held by Princeton University
Retrieved from "https://www.culture.si/w/index.php?title=Louis_Adamič_Memorial_Room&oldid=230477"
Categories:
Hidden categories: