The international Pranger Festival, a meeting of poets, critics, and poetry translators, has been organised every summer since 2004 in Rogaška Slatina and Šmarje pri Jelšah by the KUD Pranger Cultural Association. The festival is named after the "pranger", a medieval pillory or public humiliation device which was set up in the centre of villages in this region, since the festival's concept is to disclose the literary word to the public, from literary critics, theoreticians and translators, to readers and other writers. Meetings, panel discussions and readings of poetry are organised during the five-day event. On this occasion the Slovene Writers’ Association bestows an annual Stritar Award to the most promising literary critic. As of 2018, the main part of the festival is complemented by an international edition in autumn.

In Autumn 2019 the Translation Pranger Festival was launched in Maribor. 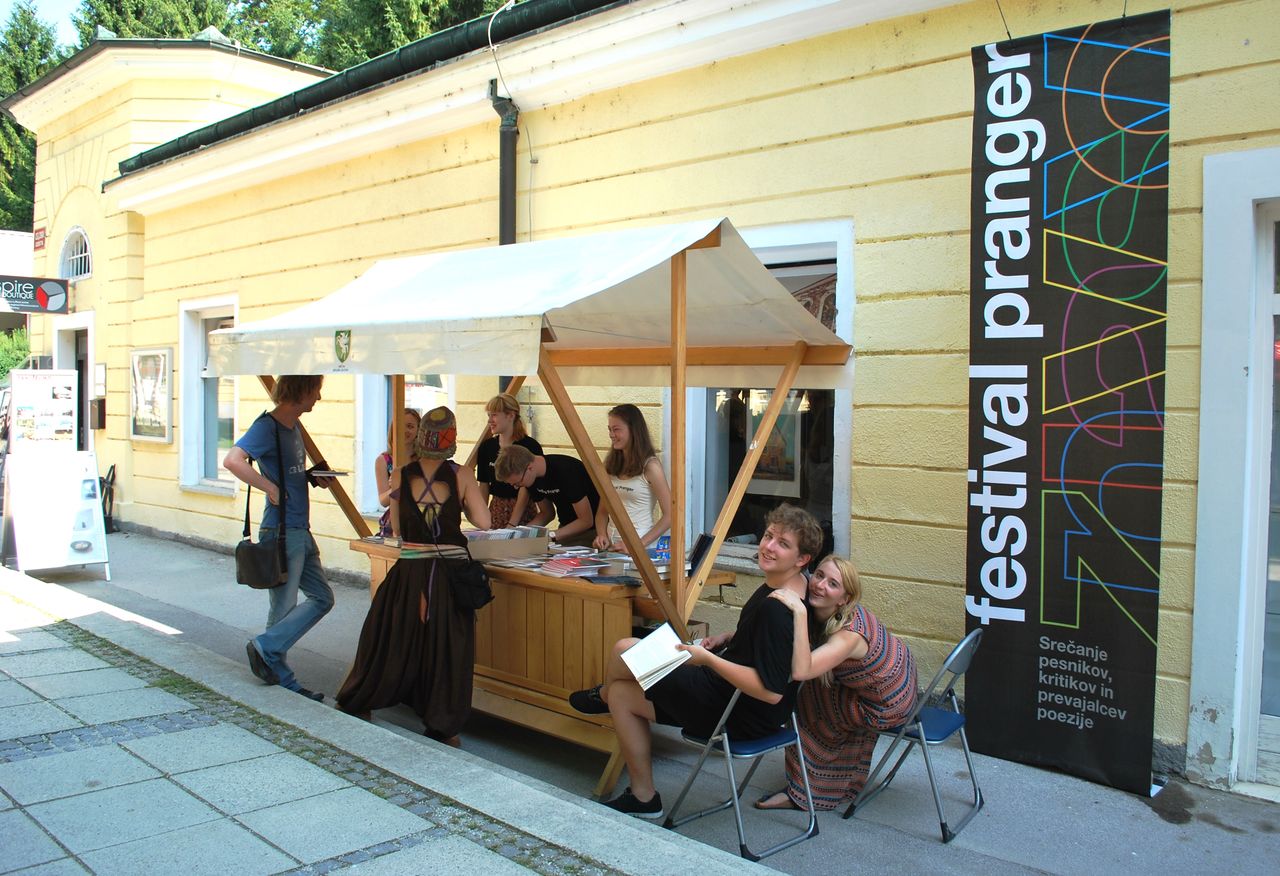 A Pranger Festival stall in front of the Ana's Gallery on the Rogaška Slatina promenade, 2015

Every year a different country and its language, into which Slovene poetry is translated, is put to the forefront (Portuguese in 2016, Spanish in 2015 and the Romansh (Switzerland) in 2014).

In cooperation with the Slovene Writers’ Association distinguished guests from the selected country are invited to take part in the events of the festival. The confrontation of authors, translators and critics allows for new and varied perspectives on poetry and forms the very heart of the event. 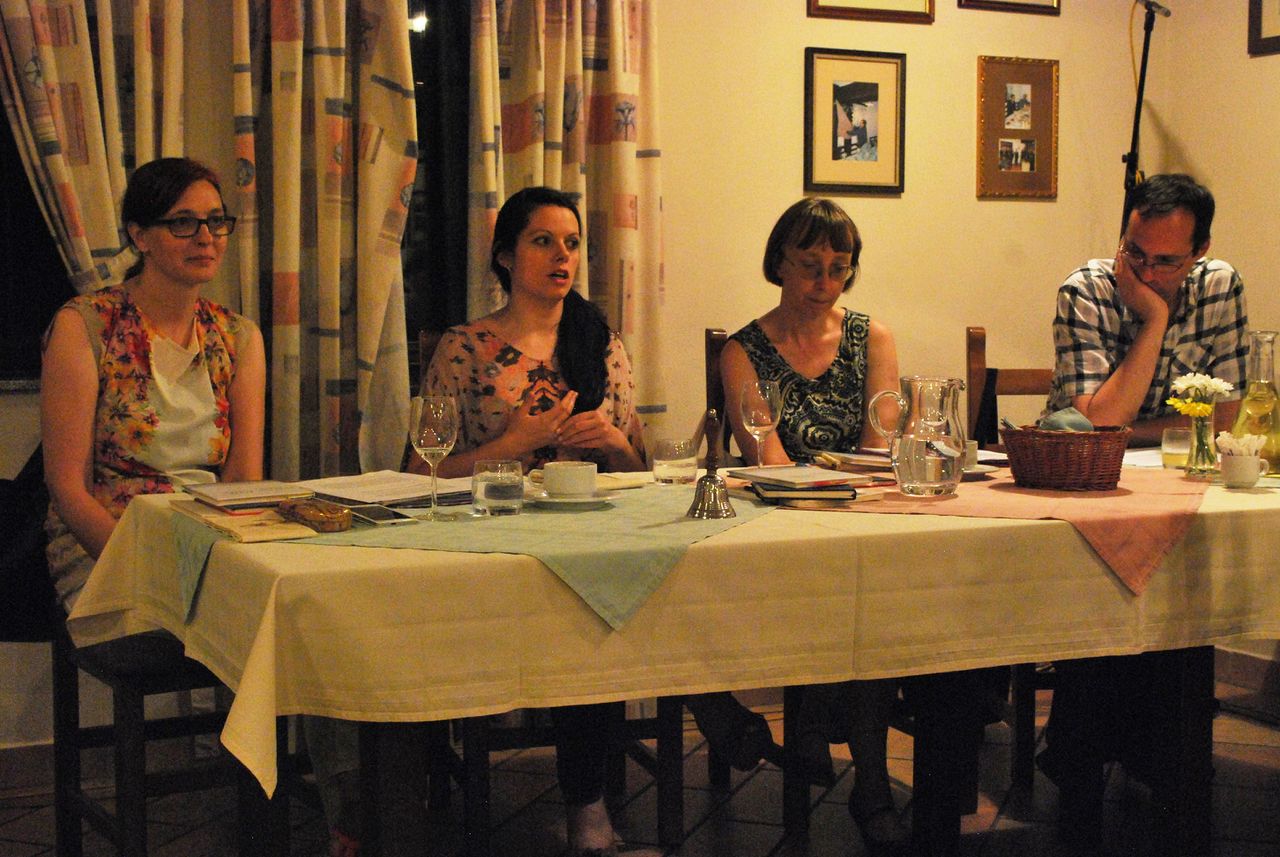 In addition to panel discussions and meetings, the festival is further enhanced by round tables on topical issues and translations, translation workshops and ELA, a creative afternoon for children and young people, named after Ela Peroci, a renowned Slovene writer of children literature. Young and budding artists are invited to participate in literary and art competitions and in creative workshops. The ELA programme is accompanied by theatrical performances. 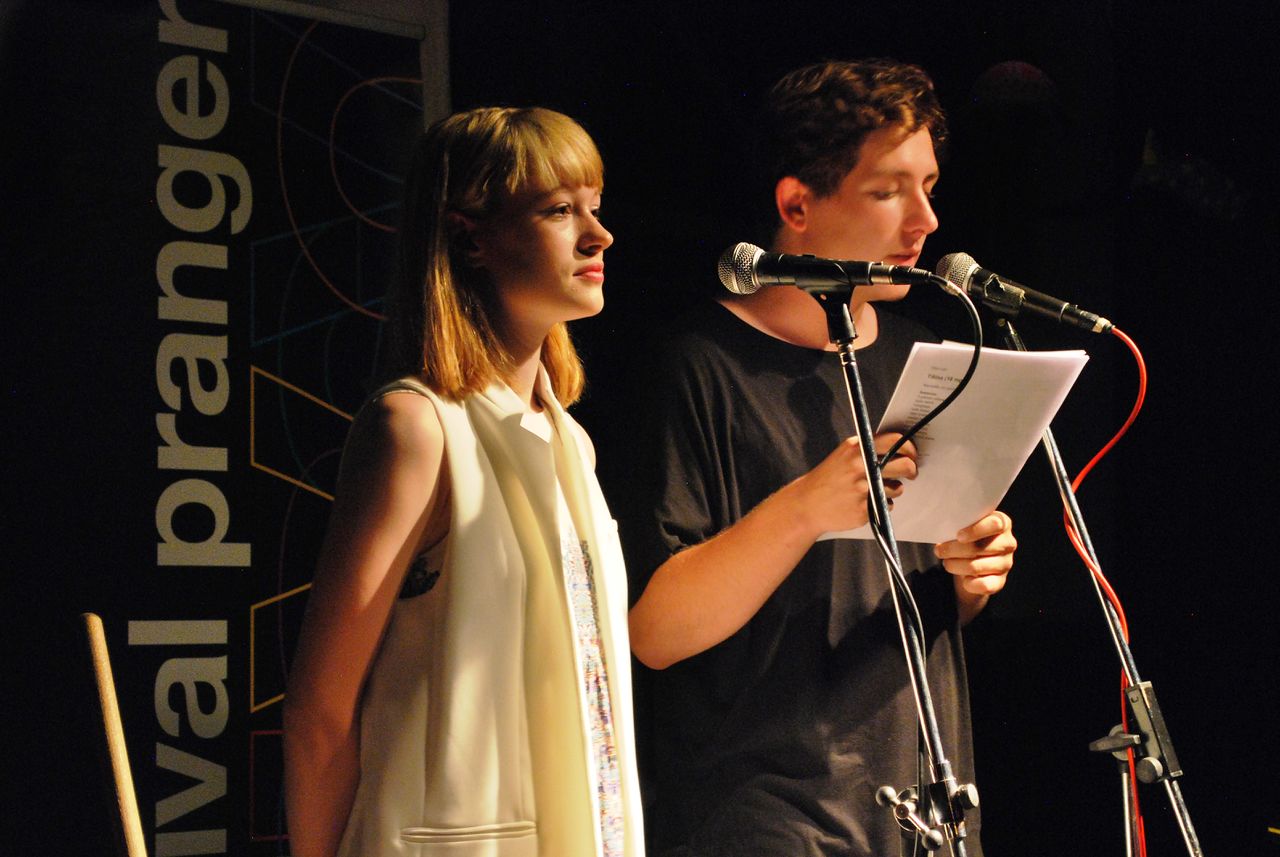 Over the past few years, Pranger is cooperating with another poetry festival, the Ljubljana based Young Rhymes Festival that takes place at Klub Menza pri koritu. The latter hosts a part of the Pranger programme, which has also one another Ljubljana outpost, the Trubar Literature House. 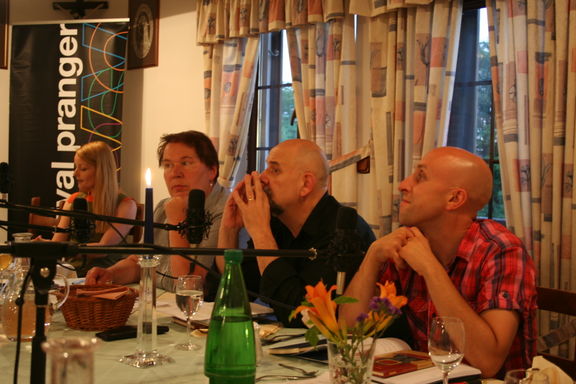 Pranger Festival, meetings, panel discussions and readings of poetry are organised during the three-day event. 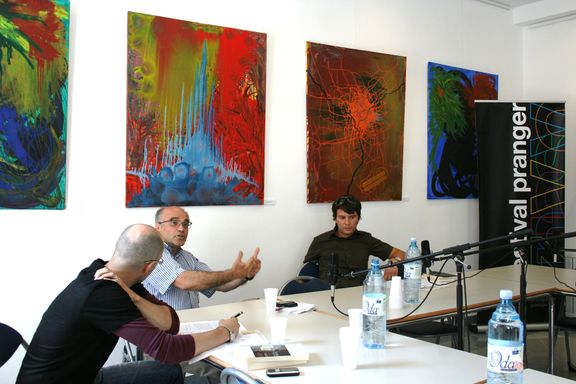 Pranger Festival, during round table discussions of topical issues, the confrontation of authors, translators and critics allows for new and varied perspectives on poetry 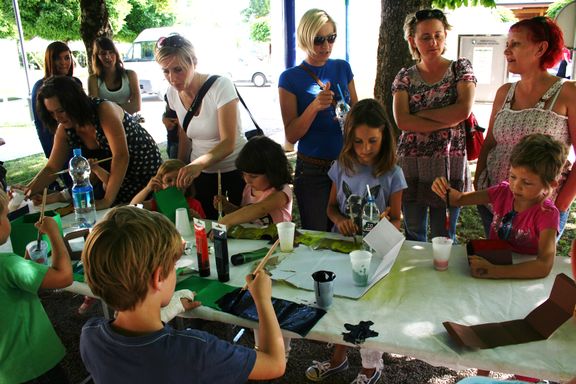 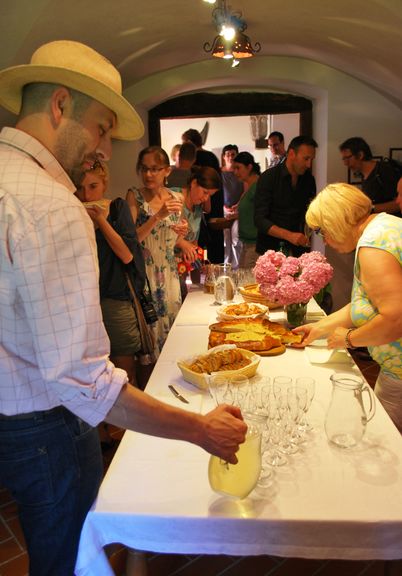 The Pranger Festival reception with local food and wine in Lemberg, 2015 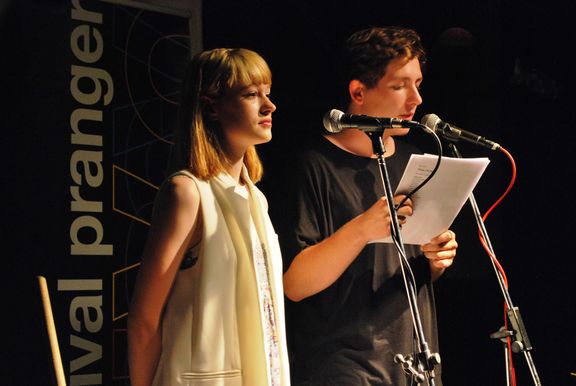 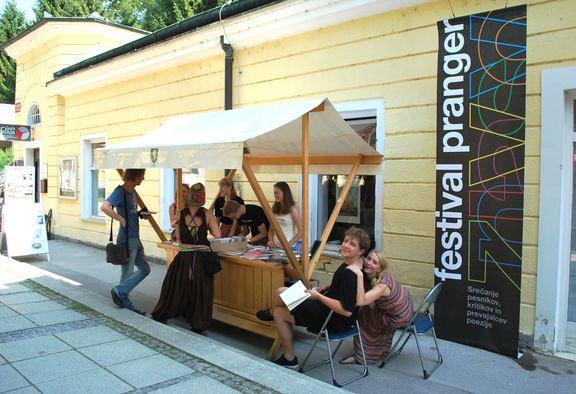 A Pranger Festival stall in front of the Ana's Gallery on the Rogaška Slatina promenade, 2015 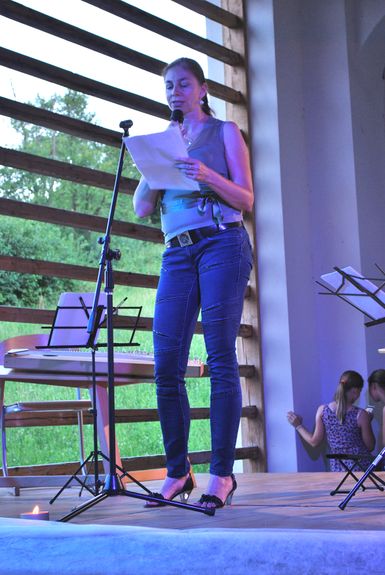 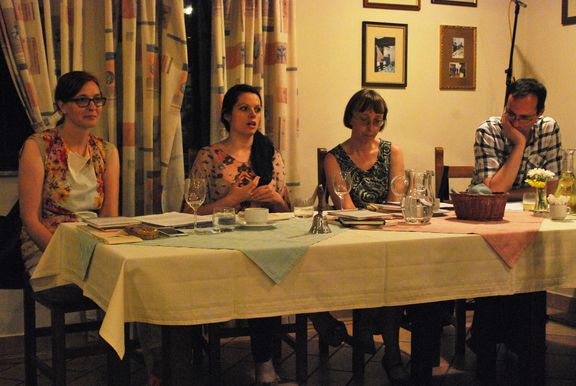 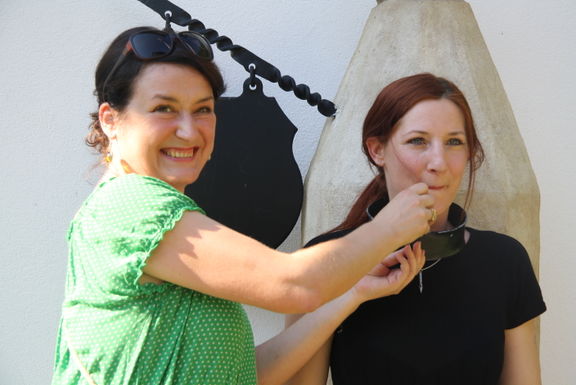 The selected poet chained onto the pillory (pranger) by Urška Černe, an intiator and head of the Pranger Festival. 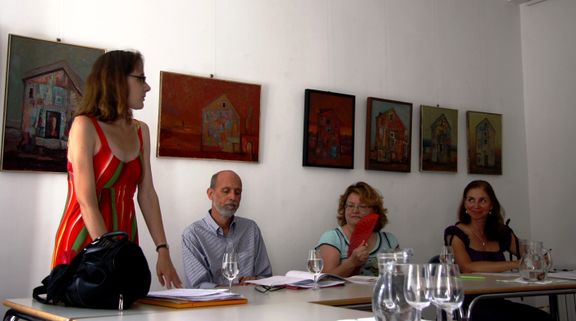 The literary translators' debate at the Pranger Festival, with Nada Grošelj, Barbara Pregelj, Pablo Juan Fajdiga and Barbara Juršič, the Spanish translators, at the Ana's Gallery in Rogaška Slatina. galerija 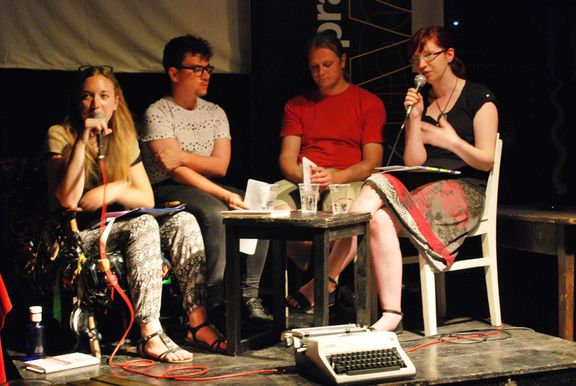