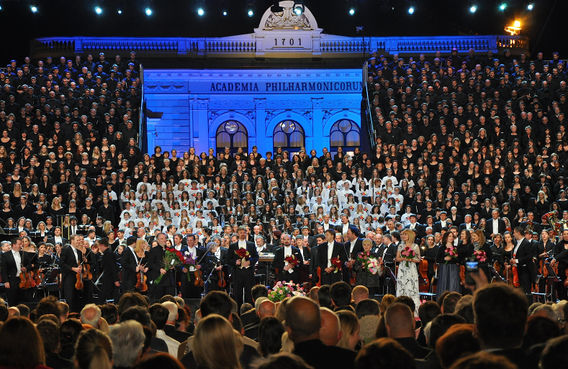 The orchestra ended the 2010–2011 season with two extraordinary performances: it accompanied Sting who presented his Symphonicity at the Arena Stožice hall (with Sarah Hicks as a conductor), and presented together with Zagreb Philharmonic Orchestra (with Valerij Gergijev as a conductor), accompanied by 21 choirs from Slovenia and Croatia, the Symphony No. 8 by Gustav Mahler at the Congress Square in Ljubljana.

The Academia Philharmonicorum (1701) and the Philharmonic Society (1794) were the forerunners of the first Slovene Philharmonic Society which was founded in 1908. The society's orchestra reached an impressive standard under the leadership of Czech conductor Václav Talich, however following Talich's departure its activity declined in the period between the two world wars. The orchestra was re-established in 1947 and was thereafter led by many renowned conductors, among them Bogo Leskovic, Samo Hubad, Oskar Danon, Lovro Matačić, Uroš Lajovic, Milan Horvat, and from 1995 through to 2004 Marko Letonja. From 2005 until 2008 the orchestra was led by American conductor George Pehlivanian, who became the first foreign conductor of the orchestra. He was followed by the French conductor Emmanuel Villaume.

The Slovene Philharmonic Orchestra performs nearly 40 subscription concerts in the Gallus Hall at Cankarjev dom Culture and Congress Centre per year (it covers two subscription concert series, named by the colours orange and blue). It prepares also concerts on special occasions (a New Year's concert, tours, national celebrations) and musical matinees for young audiences. The Orchestra also has over 40 CD recordings to its credit.

Orchestra plays predominantly standard repertoire of classical music, reaching from classical masters to the great composers of 20th century. It is known for the performances of Slavic music (Dvořák, Tchaikovsky) and monumental symphonic opus of Gustav Mahler. Each year they perform also new pieces by Slovene contemporary composers.