The Tomaž Godec Museum was founded in an erstwhile tannery in Bohinjska Bistrica 1979 within the former home of athlete, mountaineer, and progressive politician Tomaž Godec (1905–1942), a vigorous champion of tourism development in Bohinj and activist who was executed during World War II. The Gorenjska Museum took over the management of the collections in 1997 and has reconceptualised the displays. 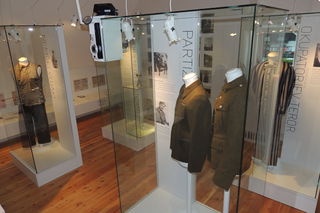 Bohinj 1941–1945 exhibition section at the Tomaž Godec Museum. It features the four dwellers of Bohinj, who during the World War II impersonated different roles: of an an agressor, a partisan, a priest and a prisoner, respectively.

The exhibition section about Bohinj during the World War I at the Tomaž Godec Museum, 2015
Retrieved from "https://www.culture.si/w/index.php?title=Tomaž_Godec_Museum&oldid=214733"
Categories:
Hidden categories: