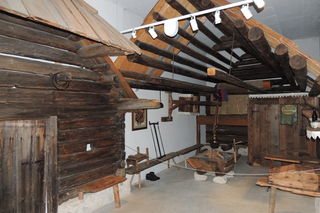 Opened in 1971, the Museum of Alpine Dairy Farming, Stara Fužina is located in Triglav National Park in an abandoned village cheese-dairy Pleskarjeva bajta of 1883 where cheese was still made as late as 1967. The museum, renovated and expanded in 1990, shows life and work on the alpine meadows of Bohinj displayed with artefacts and photography.

For centuries, Bohinj was the most important centre of alpine dairy farming in Slovenia, with its large number of alpine meadows situated close together, the highest ones reaching just below the summit of Mount Triglav. Here alpine herding dairying was developed in the most intensive manner. From May to mid-July alpine herdsmen gradually drove cattle from lower to higher mountain pastures, and from September to the beginning of November they gradually returned to the valley.

The first room presents the interior of an alpine dairy hut with furnishings from the alpine pasture Zajamniki dated from 1849. The second room is a well-preserved cheese-dairy with two built-in rennet vats and a press for forming cheese loaves. On display are cheese-making utensils, milk bowls, butter churns, and showcases featuring the equipment of alpine herdsmen and dairymen, photographs, and documents.

The third room contains photographs showing typical alpine dairy huts and their settlements in Bohinj, while the fourth room displays portraits of old herdsmen and dairymen, who for 40 or more years took care of cattle in alpine pastures.

The first room in the Museum of Alpine Dairy Farming, Stara Fužina presents the interior of an alpine dairy hut with furnishings from the alpine pasture Zajamniki dated from 1849.
Retrieved from "https://www.culture.si/w/index.php?title=Museum_of_Alpine_Dairy_Farming,_Stara_Fužina&oldid=153853"
Category:
Hidden categories: