Book publishing is the primary activity of the Sodobnost International Cultural Society (KUD Sodobnost), dealing both in literature for children (picture books as well as regular works of youth literature) and for adults (classical alongside contemporary works). It publishes authors from Slovenia and from abroad, many of them being highly renowned and awarded. The society – formally established in 2004 – also issues the Sodobnost Magazine, a monthly literary and cultural journal that is one of the four oldest such magazines in Europe.

In addition to that, Sodobnost is actively involved in developing reading culture in Slovenia and in promoting its authors abroad. As a direct result of deals that Sodobnost has with foreign publishers, anthologies of contemporary Slovene short fiction have been published abroad.

Together with the Slovene Writers’ Association the society confers the Best Short Story Award. It also bestows the Best Slovene Essay Award and the so-called Sunflower on the Shoulder Award. The latter is awarded for achievements in developing reading literacy among the younger generations.

The project (Iz)brano (a play on the words meaning selected, outside and read) brings translations of ten outstanding literary works from across Europe. The variety of carefully selected works of literature ensures that it will cater to different generations, both adults and children. The authors include, for example, the cult European writer Phillip Ardagh, the Lithuanian nominee for the International Memorial Prize Astrid Lindgren, Kęstutis Kasparavičius, and the award-winning Italian author Luigi Ballerini.

Besides commissioning translations from foreign authors, Sodobnost also runs different joint enterprises with other publishers from around Europe, among them the Polish-based Ezop and the Lithuanian Nieko Rimto. Together with them and (as of 2017) also a few other book publishing houses from Estonia, Latvia and Croatia, Sodobnost leads a cooperative European project called Our Little Library. It arranges for youth literature writers and illustrators to travel around Europe and personally get involved with their young readers (aged between 5 and 12 years). It also involves setting up various interactive and entertaining activities that stimulate reading and a child’s creativity (fabricating their literary characters, writing down their opinions about books, reading letters sent to them by the authors, solving detective assignments, etc). Under the auspices of the project, different publishing business meetings and seminars take place. 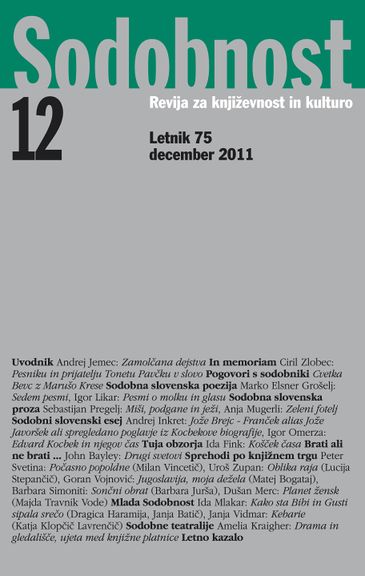