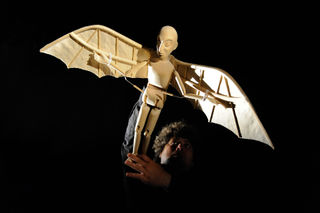 Konj ("Horse") Puppet Theatre was established in 1993 by Silvan Omerzu, who studied fine arts in Ljubljana and then undertook puppet design and set design for puppet stages in Prague. At the outset he collaborated closely with Jan Zakonjšek in performances which were aimed at adult audiences as they were replete with macabre and obscene humour, oscillating between the noble, the grotesque and the lascivious, soapiness and aestheticism, the traditional and the contemporary. Since 2001 Silvan Omerzu continues with the performances based on carefully selected texts and innovative relations between the puppet and its animator.

To date Omerzu has received the Prešeren Foundation Award in 2006 and several Slovene and international puppetry awards. ). In 2010 only his performance Forbidden Loves, based on antique motifs, was awarded at the festivals in Hungary, Croatia and Bulgaria. In Summer 2015 an exhibition Loutky a automaty at the Castle Sovinec (CZ) offers a retrospective overview of Omerzu's site-specific puppet installations. 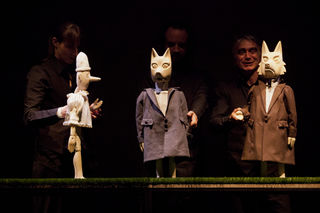 The troupe created many collaborative performances with animators Brane Vižintin and Boštjan Sever, writer Andrej Rozman-Roza, musician Erno Sebastian and other guest artists, and also prepared productions based on texts by Louis Edmond Duranty (Make a Coffin for Him, 1993), Lorenzo da Ponte (Don Juan, 1995), Alfred Jarry (King Ubu, 1998) and Federico Garcia Lorca (Don Cristobal Alba, 2000). The troupe's performances were presented and awarded at festivals at home and abroad, in Austria, Belgium, Bosnia, the Czech Republic, and the USA.

Silvan Omerzu continued in 2001–2003 with the trilogy Stories of Life and Death with premières at Cankarjev dom Culture and Congress Centre: Farewell, Prince was based on the drama by the Flemish playwright and mystic Michel de Ghelderode, while Sandmann and Councillor Krespel were based on E. T. A. Hoffman's stories. In these productions Omerzu's grotesque puppets were transformed into refined aesthetic creatures contemplating the purpose of life, the magic of death, pure art, divine perfection, and the mystery of creation.

In 2006 at the Mladinsko Theatre he directed the performance Kleist based on the love correspondence between the outsider of German Romanticism, Heinrich von Kleist, and various women. Two years later Omerzu adapted Ivan Cankar's short story The Ward of Our Lady of Mercy for the stage in the cellars of Mladinsko, transcribing the symbolist and decadent atmosphere of Cankar's writing into an irresistible dramatic work.

His next collaboration with Mladinsko Theatre was the staging of a verse drama The Tower [Stolp] about the German romantic poet Friedrich Hölderlin written by Ivo Svetina. With the confrontation and intertwinement of actors and puppets he continued his exploration of the relationship between them. With his characteristic minimalism of puppet animation he put under question the necessity of puppet movement.

In 2009 Omerzu adapted and directed the story from Ovid's Metamorphoses about Echo and Narcissus. He continued with ancient myths in 2009 in Forbidden Loves, coproduced with Ljubljana Puppet Theatre. Forbidden Loves presents the stories of Echo and Narcissus, Daedalus and Icarus, Queen Pasiphae (who conceived with a bull and gave birth to Minotaurus) and Pygmalion (the sculptor who fell in love with one of his sculptures). The performance received many international awards in Hungary, Croatia, and Bulgaria as well as at home in Slovenia. 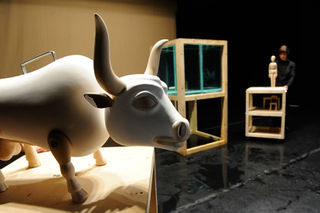 The new Pinnochio interpretation and stage visualisation that Omerzu staged at the Ljubljana Puppet Theatre in 2015 featurs puppets of different techniques and dimensions, acting, shadows and music.

Silvan Omerzu has also engaged in the visual arts: his fine art puppet-sculpture ambient installation Tears was presented at Božidar Jakac Art Museum, Kostanjevica na Krki and at Ljubljana Castle, and was subsequently shown in Brussels in January 2008 within the scope of the Europalia project.

In 2009 Omerzu set up the Table Scenes, a site-specific installation at the International Centre of Graphic Arts, Ljubljana, a series of miniature table scenes arranged with puppets in various poses at the backdrop of the exhibition rooms doorways, a combination of light and objects which drew the viewer into imaginary worlds.

"In his combination of materials and technology, Omerzu creates an impressive work of design and sculpture, which contains an elemental energy he then sets in motion. There is no free will in this motion; instead, we see a kind of primordial order, in which man is not the measure of all things, a world that is governed by laws based on a different origin of nature and life."

Although Omerzu's work is mainly intended for adult audiences, there have been some children's performances by Konj Puppet Theatre in recent years. These are Kroki and Friends [Kroki in prijatelji] (2006), Kroki Celebrates [Kroki praznuje] (2007), Kroki in the Theatre [Kroki v gledališču] (2010) and Presents ([Darila] (2010). The performances focus on Kroki, a little crocodile who has many other animal friends.

Ti loviš [You Catch] written by Saša Eržen was set on stage by Sivan Omerzu with the ensembel of the Ljubljana Puppet Theatre in 2012 and toured with it widely (Sarajevo, Rijeka, Switzerland, Austria, United Kingdom). 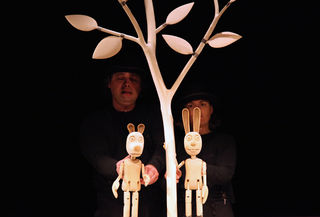 Queen Parsiphea, who makes love with the divine bull and gives birth to Minotaur: just one of the famous antique motives featured in Prepovedane ljubezni [Forbidden Loves] conceived by Silvan Omerzu, a director and artist. Produced by Ljubljana Puppet Theatre and Konj Puppet Theatre in 2009.

Ti loviš [You Catch] written by Saša Eržen and directed by Sivan Omerzu, who created the puppets and set design. Produced by Ljubljana Puppet Theatre and Konj Puppet Theatre in 2012.

Ti loviš [You Catch] performance was directed by Sivan Omerzu who created the puppets and set design. Ljubljana Puppet Theatre's ensemble toured with it to Sarajevo, Rijeka, Switzerland, Austria and United Kingdom.

Ti loviš [You Catch] written by Saša Eržen and directed by Sivan Omerzu, who created the puppets and set design, toured internationally. Produced by Ljubljana Puppet Theatre and Konj Puppet Theatre in 2012.