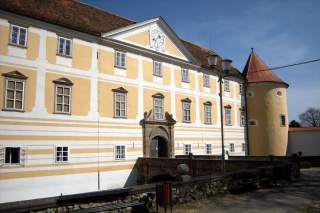 In the 14th century, the castle was owned by the Habsburgs; subsequent owners included the Walsees (from 1355) and the Counts of Celje (from 1368). When the latter died out in 1456 the castle once again reverted to the Habsburgs, this time represented by the Duchy of Styria. In 1587, Hans Vetter bought it, he was succeeded before 1681 by the Wildensteins and in 1717 by Ignaz Maria Attems. The Attems remained in possession of the castle until 1945. After World War II, Slovenska Bistrica Castle was nationalised and adapted for housing purposes until 1985, when its restoration as a historic monument begin.

The castle was thoroughly rebuilt by the Vetters between 1623 and 1651 when it achieved its present Renaissance plan. The inner courtyard of a slight trapezoid form is surrounded by four wings with towers in the corners. Towards the end of the 17th century, the Wildensteins laid out a castle park with a 200-metre-long beech avenue and park statuary. The Baroque rebuilding by the Attems was concluded in 1721 with the Illusionist painting of the Chapel, stairway and Knights' Hall by Franz Ignaty Flurer – these are the only signed paintings by him in the Slovene territory. At the same time, they are his best and most extensive work and also the only preserved in castles in Styria with his signature. The Knights' Hall is dedicated to Apotheosis of Hercules (the adoption to the gods). His myth is a popular motif in the Baroque illusionist painting. All four walls are painted with rich architecture, numerous figures and a wide range of ornamentation. The Chapel, fully painted by Flurer as well, is dedicated to Mary.

The castle is managed by the Slovenska Bistrica Cultural Institute. The castle's extensive museum collection was set up in 1985. Today, a number of various collections occupy most of the castle's premises. Besides the numerous permanent exhibitions, it houses various cultural events, including the Old Bistrica Evenings in the inner courtyard in June and the Festive Castle Town in the central yard in December. Slovenska Bistrica Castle is also one of the historical venues for the Seviqc Brežice Festival presenting exquisite Early Music concerts.

Concerts, dance and theatre performances, lectures, book presentations as well as various temporary exhibitions (artworks, photographs, ceramics and small plastics exhibitions in the gallery and the exhibition grounds of Grasl's Tower) are held inside, in the courtyards and in the park. The Wedding Hall is dedicated mainly to weddings.

The castle stands at the north-western corner of Slovenska Bistrica historical centre, which was surrounded by city walls, preserved almost intact until World War II. The castle's tower was part of the walls, while the other defending structure was the south-western tower, called Grasl or the Grain or Gunpowder Tower. Next to both towers, some fragments of the walls are still preserved as well as a water ditch at the castle.

The park at the west side was originally designed by Vetters in the second half of the 16th century in the French geometric style. In times it has been overgrown. Only a 200-metre-long beech avenue remained of the original 85 metres by 240 meters big plan. Today's park is only a tiny part of the historic one and is redesigned in the English style. It is separated from the castle by a street. The rest of the former park area is built with health centre, primary school, gym and a new road link.

The standing statues of Mercury and Hercules and a bust of the Four Seasons from the late-17th century used to stand in the park, but are now preserved in Slovenska Bistrica Castle. Both the remnants of the circumferential wall with a powerful portal and the park were restored in the 1990s.