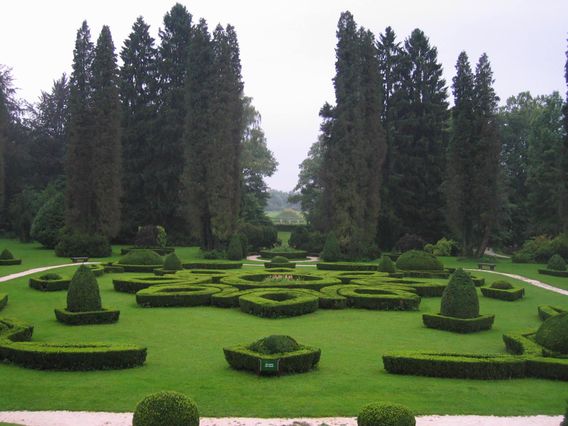 Opened to the public in 1952, Arboretum Volčji Potok originally formed part of the Souvan family estate in 1885, which was taken over by the University of Ljubljana in 1952 and legally declared a place of cultural and natural heritage of national importance. Now independent of the University of Ljubljana, it is the most-visited horticultural facility in Slovenia which in recent years has become famous for its spring flower shows. True to its name meaning a collection of trees and bushes planted for educational purposes, the arboretum is primarily a botanical garden for woody plants, the only one in Slovenia.

The estate Volčji Potok, situated near Kamnik, was already mentioned by Valvasor in the 17th century. A picture printed in his book presents the old castle at the top of the hill (first mentioned in 1220) as being already in ruins, and the newest mansion at the foot of the hill, built by the Bonhomo family.

The estate changed owners several times; the Bonhomo family was followed by the Burger family, then the Gozani family, and in 1882 it came into the ownership of Ferdinand Souvan. He rebuilt the mansion in 1885 and planted the park encircled by walls. His son Leon Souvan enlarged the park by pulling down the walls and planted around 12 hectares with domestic and exotic trees. Instead of demolished walls he planted a beech tree hedge along the southern and south-western borders. The park was a frequent venue of Slovene impressionists, including Matija Jama. 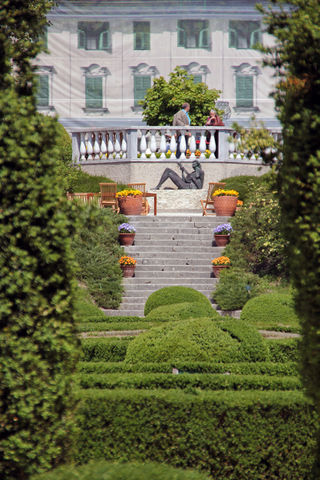 The 300-year-old mansion was burnt down in a fire in 1944. After Leon Souvan died the park came under the management of the Faculty of Agriculture and Forestry in 1952, today the Faculty of Biotechnology, University of Ljubljana. The collaboration with the university ended in 1965.

The arboretum was financially independent between 1965–1999 and has therefore shifted to manufacturing and services. Since 1999 it has been under the supervision of the ministry responsible for culture.

The Arboretum Volčji Potok Institute, established in 2003, manages the cultural monument of state importance and presents its virtues. It takes care for widening the park and garden culture in Slovenia as well as for other cultural state-owned monuments of formed nature. It cooperates with similar institutions worldwide. Evaluating and developing the arboretum's collection, testing plans, and presenting dendrological information are some of the tasks of the professional staff.

The original entrance tree-lined avenue from the 19th century is continuous with the central part of the park geometrically formed in the French style, while other parts are in the English style. The geometric park, designed in 1918 by Leo Souvan, once stood in front of the mansion, which has been missing since 1944. The park leads upstairs to the old park in the immediate vicinity of the missing mansion. The two stone tables are surrounded by two horse chestnut trees and two plane trees, all originating in the 19th century.

A hill overgrown with forest and an archaeological site at the top form a background to the plantation at the north. At the top of the hill there are ruins of pentagonal Romanesque residential tower, originating in the 13th century, and of walled castle courtyard with a Renaissance Bastille at the entrance, from the 16th century.

The Arboretum Volčji Potok produces plants in its own nurseries, runs a garden centre, employs a group of landscape architects, and does practical landscaping all over Slovenia. The arboretum itself comprises 88 hectares of ground with a diversity of soil types, occupied by about 2,500 different species of trees and shrubs. The plant collection has been thoughtfully designed as a landscape park. The park includes five artificial lakes and 30 hectares of forest, which houses particularly important union of fir and three-lobed moss Bazzania trilobata.

Trees and bushes belong to the basic botanical species from Europe, North America, and Asia as well as to cultivars that have been raised for ornamental purposes. The richest collections of species are of maple, linden, birch, and beech trees. To mention are the collections of cultivars of fan-maple Acer palmatum, of scaly conifers, of rhododendrons and roses, and of evergreen deciduous trees.

In 2003–2004 the interactive herbarium was established online. The collection consists of selected non-indigenous and native woody plants from the Arboretum.

The arboretum hosts different cultural events, concerts and exhibitions. On the ground floor of the park gallery there is a hall for solemn receptions and wedding ceremonies.

French park in the Arboretum Volčji Potok, located near Kamnik

A path through the 30 hectares of forest in the Arboretum, the Jelova draga, which is significant for its combination of fir and tropical moss (three-lobed mossBazzania trilobata)

Box or Buxus plants at the Arboretum Volčji Potok, particularly suitable for topiary

Parterre in the Arboretum Volčji Potok, which originally formed part of the Souvan family estate in 1885 and opened to the public in 1952

Water lilies, there are five man made lakes in the Arboretum
Retrieved from "https://www.culture.si/w/index.php?title=Arboretum_Volčji_Potok&oldid=289427"
Categories:
Hidden categories: