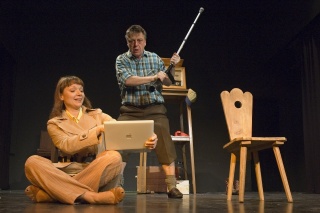 Established in 2003, Rozinteater is a vehicle for the talents of the well-known poet, dramatist, actor, and translator Andrej Rozman Roza. Rozman prepares his own productions, ranging from simple street performances and children's shows to politically engaged satirical performances for adults. Rozinteater's performances often tackle issues connected with Slovene national identity and re-examine its mythologies.

Andrej Rozman Roza, the co-founder and during 1981–1995 the leader of Ana Monró Theatre and a recipient of several awards (Golden Bird Award 1984, Sever Award 1986, Levstik Award 1999, Ježek Award 2005, Župančič Award of the City of Ljubljana for achievements in the field of culture, and the Prešeren Foundation Award 2010), is an ingenious author, witty observer, and poet. He has been engaged in hundreds of Slovene drama performances and films, both as an actor and a songwriter.

Based at the KUD France Prešeren in Ljubljana, Rozinteater has thus far produced 6 performances for adults and 3 for children.

Roza's theatre performances are marked with humour, used as an artistic device, the aim of which is to present what seems self-evident from a new perspective. Roza's humour is a soft version of Slovene stand-up comedy; his performances are stamped with usage of lapsus, privatisms, performed stage directions, instances of addressing the audience, and alienation effects.

The performances include: Cabaret Implosium [Kabarete Simplozij] (2002), The Visit [Obisk - od monodrame do cestnega spektakla] (2004), The Miser - The Most Stingy Performance [Skopuh - najbolj skopa predstava] (2006), based on Molière's The Miser, which deals with the Slovene attitude toward language and culture within the globalised world of economic competitiveness, Rent or We are the Nation on the Best Location [Najemnina ali We are the Nation on the Best Location] (2007), and Passion de Pressheren (2007), the final from a series of performances dealing with Slovene identity, which by evoking the life of the Slovene Romantic poet France Prešeren discusses the idea of an independent homeland. In November 2011 the Hiphophondrija based on the Le Malade imaginaire(The Hypochondriac) by Molière is set into the framework of Capitalism and the New Age.

Performances for children include The Gigantic Balloon [Balon Velikon] (2002) (also translated into English) and a co-production with Slovene National Theatre Drama Ljubljana How Oscar Became a Detective [Kako je Oskar postal detektiv] (2009). In 2009, Roza released the album Osvežilna rimonada at Panika Records with songs from the children's performance of the same title. In his performances, Roza often collaborates with the musician Goran Završnik.

Roza, the initiator of street and improvisation theatre in Slovenia, appears in numerous festivals in Slovenia and abroad, such as Ana Desetnica International Street Theatre Festival, Festival of Monodrama, Ptuj, and Borštnik Theatre Festival. The productions by Rozinteater tour extensively across Slovenia and make guest appearances at Slovene National Theatre Drama Ljubljana, Metelkova mesto Autonomous Cultural Zone, Prešeren Theatre Kranj, etc. Roza has also appeared in the Euronatal event in Lisbon, at the Kids Euro Festival 2009 in Washington, and at the Bookworld Fair in Prague in 2005. 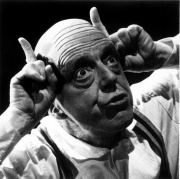 Poster for the performance Najemnina ali We Are The Nation On The Best Location, 2008, Winner of the Brumen Award, 2009

Mirel Knez and Andrej Rozman Roza in scene from Najemnina ali We Are The Nation On The Best Location, 2008 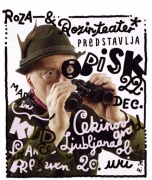 Poster for the performance Obisk, 2005

How Oscar Became a Detective by Andrej Rozman Roza, 2009 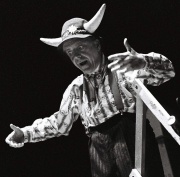