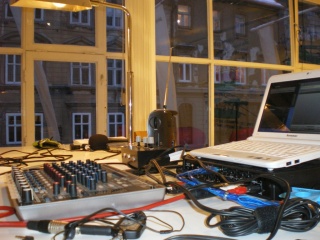 radioCona is a temporary radio project for contemporary arts established in 2008 by Cona Institute, an institute for contemporary arts processing. The radio has become an important agent in claiming public radio-frequency space for artistic and broader social contexts. It runs an occasional innovative programme of its own production and serves as a common platform for various contemporary visual or performing arts events in Ljubljana.

radioCona maintains an important online audio archive of new media art, experimental music and recorded events such as round tables and debates on the major issues concerning the free-lance and independent production in Slovenia (cultural policy, public space and copyright) as well as international symposia (Reflective Dramaturgy by Maska Institute in the frame of the 2010 Ukrep - Festival of Dance Perspectives, for example). The archive is freely accessible on the radioCona blog.

In 2009 the Rome-based Internet radio RAM LIVE and radioCona broadcast the Sounds like Venice live programme during the opening of the Venice Biennale and also released podcasts.

In 2010 the radioCONA platform along with partners from Italy (RAM Live/Zerynthia) and Serbia (Novi radio Beograd, KIOSK NGO) investigates Radio as an Artspace, a communication platform used as a medium for artworks, discussion and social interaction. The project is co-funded from the Balkan Incentive Fund for Culture (BIFC).