The space that was operating as a dislocated exhibition space of Moderna galerija from 1952 up to 2010. The gallery programme from 2011 to 2013 was run by the Ganes Pratt Gallery. In 2013 the owner of the space rented out premises of Mala Gallery to a commercial souvenir gallery. For a few years, up to 2019, the space did not longer perform activities described below.

Operating as a dislocated exhibition space of Moderna galerija, the Mala ("Small") Gallery featured small-scale individual exhibitions of contemporary art, offering both artists and curators the opportunity to take an innovative approach. The gallery is located in the building of the National Bank of Slovenia on the busy street of Slovenska cesta in the very centre of the city and attracts a lot of attention.

Since the 1990s, site-specific projects and exhibitions prepared by international guest curators have featured heavily in the gallery's programme.

This small gallery was opened in 1952 and at first it was managed by the Union of Slovene Fine Arts Associations. In 1959 the space was refurbished by the architects Oton Jugovec and Svetozar Križaj. Since 1980 its programme has been integrated in the exhibition policy of Moderna galerija.

Beside shows of contemporary Slovene artists, the work of many prominent international artists has been presented here. In spring 2009 the Mala Gallery exhibited the new acquisitions of the Collection of the Museum of Modern Art, namely the work of 3 young established Slovene artists: Miha Knific, Miha Štrukelj, and Sašo Vrabič.

In the period 2008–2009 the gallery has given the podium to artists such as Danica Dakić, Mik Aernout, Sašo Sedlaček, Sandi Červek, Antje Ehmann, Harun Farocki, Deimantas Narkevičius, Silvia Kolbowski, Tomislav Gotovac, Viktor Bernik. In 2010 the Croatian artist David Maljković confronted the public of the Mala Gallery with the modernistic heritage of ex-Yugoslavia that has been forgotten and overlooked. In spring each year Mala Gallery was also the venue for the exhibition of the Igor Zabel Competition, an annual event dedicated to curatorial research in contemporary art, which is based on the international call for entries. The projects are selected by an international jury. In 2010 the exhibition Untaken Photographs curated by Arielle Azoulay took place; in 2009 Mercedes Vicente was selected to prepare the exhibition of New Zealand video pioneer Darcy Lange and his studies created between 1974 and 1977; in 2008 Birgit Rinagl and Franz Thalmair were the selected curators. 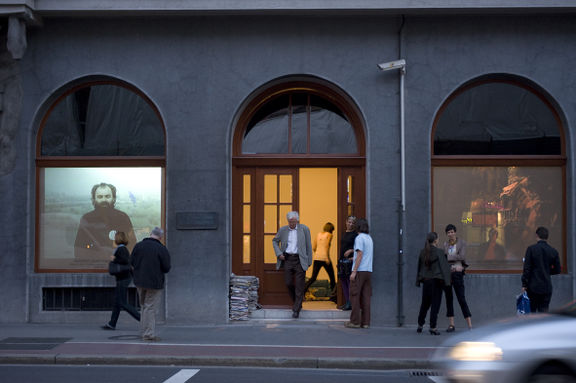