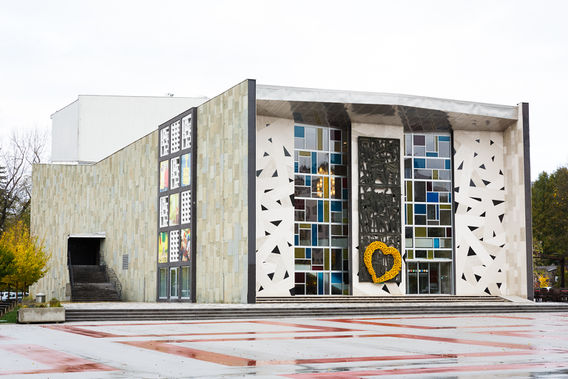 The Velenje Culture House is managed by Velenje Festival and offers facilities for presenting theatre performances by Slovene theatre houses and puppet shows, concerts, as well as educational programmes and other events. It is a member of KUDUS Association. The building itself is a prime example of Slovenian modernist architecture of considerable urbanistic significance, thus it was in 2005 declared a cultural monument of local significance by the Municipality of Velenje.

The culture house was built between 1957 and 1962 by Slovenian architect Oton Gaspari and is located on a Tito Square in Velenje which is apart from Nova Gorica, the only Slovenian town completely built in the post-WWII era. As one of the most interesting architectural and sociological phenomena of Slovenian urban culture, the city of Velenje was designed under the strong modernist influence of the ideas of "utopian socialists", as an "ideal city" of the new socialist order. Built during the time of the national cultural revival with the aim of raising the education level and cultural awareness the Velenje Culture House is the embodiment of the idea that poorly educated workers had to be offered high-quality culture.

The front of the building has the role of a two-dimensionally designed stage setting and the building itself acts as a large scale sculpture giving the impression of an elevated stage open to the crowd. The perforated facade is covered by tiles of multicoloured limestone and intermittently placed ribbons of coloured glass and interestingly designed iron railings. The building's monumentality is further enhanced by its trapeze shape, massive stone frames, tympanum shaped front and flat roof with big bronze relief by Slovenian sculptor Stojan Batič positioned in the centre. Inside, there is a big, multi-functional hall with a stage that can host up to 400 people, a small theatre with 100 seats, technical facility rooms and management offices.

Run by Festival Velenje Public Institute, the culture house acts as their main event venue hosting various cultural events, celebrations, music and theatre performances, puppet theatre plays for children, film screenings, workshops and symposiums. It acts as one of the venues for Summer in Velenje Festival and also for the biggest children's festival in Slovenia called Pika's Festival. The Velenje Puppet Theatre and the Velenje Dance Theatre also operate within the premises of culture house, preparing and staging several of their own productions every year.