All Strings Detached is a Slovene duet consisting of Jana Beltran (vocal, electro-acoustic guitar) and Vesna Godler (vocal, electric bass, percussion). This singer-songwriter pair banded together in the spring of 2013 to bring together their musical visions and deliberations.

All Strings Detached performing "To Do", a song from their 2014 album Heavy Rain.

All Strings Detached formed as a duet in April 2013 when Beltran and Godler felt the need to surmount some of the limitations they had been facing in their previous bands (Koza-Riba, Didiwa, Aritmija). They joined together, started writing music and lyrics, and when they started performing intimate, but expressive and powerful gigs, they were quickly noticed by the public. One of their first concerts took place at Klub Menza pri koritu in June 2013 when they performed as a part of the Young Rhymes festival.

All Strings Detached fit nicely into the singer-songwriter-duet mould, but they are very unique in the honesty and vulnerability they allow themselves to experience and articulate. Their music exudes yearning and melancholy and poses a certain instrumental minimalism which is perfectly complemented by their poignant imagery and live appearances. They mostly perform on Slovene stages, and they seem especially keen on returning to Klub Menza pri koritu, where they also opened for Portuguese singer and performer Rita Braga in March 2014.

After a continuous string of concerts and many favourable responses from the listeners and critics, they released their first album Heavy Rain in June 2014 on the Radio Študent Records. They returned to Klub Menza pri koritu and after that appeared on a number of festival and club stages, in Slovenia as well as in Austria and Croatia. 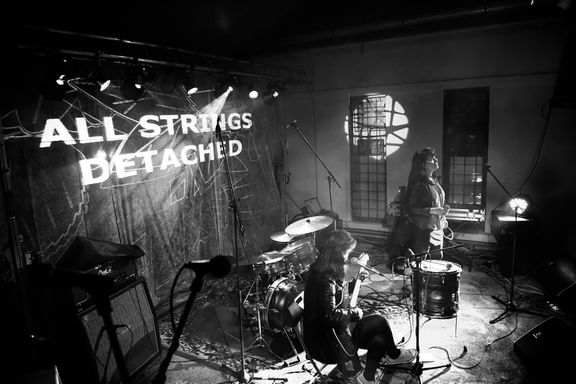