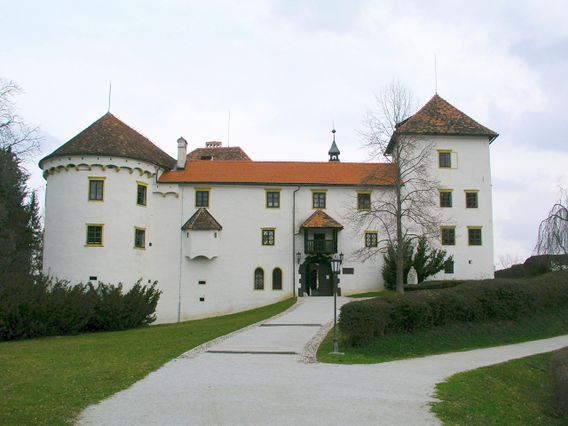 In 1511 the Lords of Wagen began building Bogenšperk Castle as a replacement for their fortress at nearby Lichtenberg, which had become uninhabitable following an earthquake. The new castle was a Renaissance building with typical round towers. The castle reached its golden age at the end of the 17th century when Janez Vajkard (Johann Weichard) Valvasor (1641–1693) lived and worked there. After 1970 a systematic renovation of the castle began and today, thanks to Valvasor's heritage, it is one of the most important cultural monuments in Slovenia. Since 1998 the Bogenšperk Public Institute has managed the building.

Janez Vajkard Valvasor and his work

The original copy of Valvasor's most famous work Die Ehre des Herzogthums Crain [The Glory of the Duchy of Carniola] from 1689, a monumental work of at least 3,532 pages on late 17th-century Carniola, is on display here. Valvasor, an elected fellow of the Royal Society of London, was one of the first printers in Carniola to introduce copperplate printing, which was then highly developed in Germany and the Netherlands. This activity was carried out in the castle from 1678 to 1689.

Valvasor's graphic work is presented in two rooms; in the first a special construction presents publications printed in Bogenšperk (a total of 11 different copperplate printed works were produced in 11 years, six of a topographical nature and three with religious content), and the second part of the collection presents the printing works as it was in Bogenšperk in Valvasor's time.

In 2010 Theatrum mortis humanae tripartitum (1682), the last book from the Valvasor's workshop was obtained and is now on display. The didactic graphic book in three parts deals with human mortality and death and is an important proof of Valvasor's artistic abilities.

Eight showcases exhibit rocks, fossils and minerals, collected exclusively on the territory of Municipality of Litija. Some of the exhibited minerals belong to the famous Zois Collection of Minerals, which ranks as one of the most important existing collections.

The geodesic collection (installed in 1987) is also connected with Valvasor, who together with his collaborators developed a map of the Slovene lands and neighbouring Croatia. It shows Valvasor's significant contribution to the transcription of Slovene geographical names. The collection is a survey of cartography from its beginnings in the Roman empire to the present day, with a special emphasis on the development of cartography in Slovenia in the 19th century (from which the famous Kozler Map of the Slovene Lands dates) and after the Second World War.

The hunting collection presents hunting trophies provided by the associations of hunters from Zasavje. The collection on the Second World War is the oldest museum collection in Bogenšperk Castle, and was opened in 1972. For a short period during the Second World War, Bogenšperk Castle was a border crossing point between Germany and Italy, which had between them occupied and divided most of the territory of Slovenia.