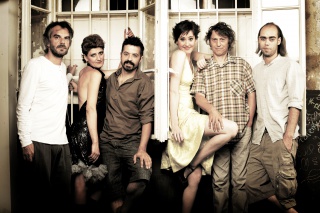 Formed in 2003, Brina have since then earned international acclaim. At first rewriting and rearranging traditional Slovene folk songs into a more modern sound, the band has gradually evolved into a confident ensemble which also creates its own specific expression. Playing in a variety of modes, from melancholic Slavic ballads to raucous cabaret and tango songs, they are all very much characterised by Brina Vogelnik's soft and intimate voice.

Brina's first album Mlado leto [Young year] was welcomed very warmly both in Slovenia and in foreign specialised press, but a more notable impact on the global folk scene came in 2005, when Brina released their second album Pasja legenda [A Dog's Legend]. The album was listed on the Top 10 list of World Music Charts Europe for 3 months and received international acclaim among critics as well as listeners and concert goers around the world. A third album Slečena koža [Undressed Skin] has recently come out. All the albums were released on DruGod label.

Brina evolved from two earlier bands fronted by singer Brina Vogelnik – Šišenske bajke and Brina&String.si. In the 1990s, Šišenske bajke were one of the first bands that started showing an interest in modernising traditional Slovene folk motives, an approach that has since then been taken over by a number of quality and successful musicians. With String.si Vogelnik stirred a lot of public interest and was also awarded the Golden Bird Award, an award given to promising young artists in Slovenia.

The band presented their first album at the Druga Godba Festival and till the release of their second album mostly played on Slovene stages. The second album was accompanied by another Druga Godba stage performance and was followed by appearances on Jazz Cerkno Festival (Slovenia), Ethnoambient festival (Croatia), the prominent WOMEX (World Music Expo) festival (Spain), and many other stages. Since then they have played on the "Vlak raznolikosti" (Train of diversity) project in Spain, toured in North America, and played on various other stages throughout the world.

Brina @ The Chicago Cultural Center 091907 by rpmime on YouTube

An excerpt from a Brina gig at the Chicago Cultural Center, 19 September 2007.