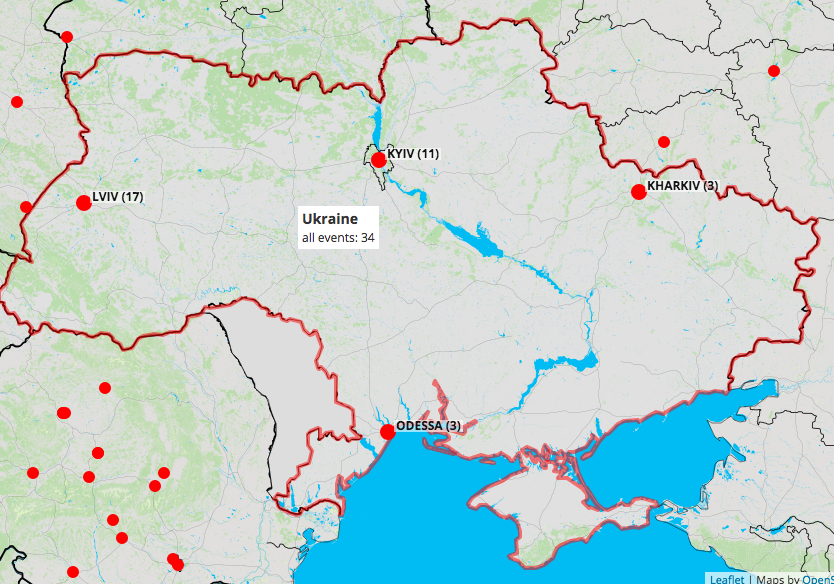 The Culture.si database of worldwide events reveals roughly 30 events that took place in Kyiv, Lvov, Kharkiv and Odesa since 2010. We spot a few festivals with Slovene participation: the Odessa International Film Festival, the European Film Festival Kyviv, the Lviv International Literary Festival, and the Two Days and Two Nights of New Music Festival. The Kyiv National Opera public was promptly introduced to Edward Clug's choreography in Radio and Juliet contemporary ballet, produced by Slovene National Theatre Maribor, and Kharkiv saw the live feat by Laibach, however, literary events prevail. Evidently, the Slovene Embassy and Consulates in Ukraine has played a significant role, as well as the Slovenian Language Studies (Slavic Philology Departments) that were founded a decade ago at the Kyiv and Lvov National Universities. In May 2018, the ZRC SAZU published the Ukrainian-Slovene dictionary and its Slovene-Ukrainian version.

Back to Slovenia: from web news (Kulturnik.si) we get a prompt insight into a line of creators from Ukraine who have been hosted in Slovenia, and a list of interested reviews and interviews. Let us mention only the 2016–2018 guests: a metalcore band Jinjer (MetalDays, Tolmin); Dakh Daughers, a girl-actress band from Dakh Theatre (Okarina Festival Bled); and the Lviv Philharmonic Orchestra accompanying Laibach in Križanke (Festival Ljubljana). The Ljubljana Jazz Festival staged a continuous midnight music piano concert by Lubomyr Melnyk. In Slovenia, we saw films by Sergey Loznica and documentaries by Alisa Kovalenko. Tobačna 001 Cultural Centre hosted two exhibitions by Anna Zvyagintseva (Hudrada group) and Nikite Kadan (Revolutionary Experimental Space group), following their 2-month residency in Ljubljana in Summer 2018. We've read Slovene translations of contemporary writers such as Serhiy Zhadan, Andrey Kurkov and Yurii Andrukhovych, who got the Vilenica International Literary Award in 2017. Kateryna Kalytko, a recipient of the CEI Fellowship for Writers in Residence in 2015, won a Goga Literary Residency in Novo mesto via the Creative Europe project Reading Balkans, South and East reaches West – iSE2W which offered in 2018 three residencies to Ukrainian authors.

A few European platforms initiated by Slovene organisations involve Ukrainian partners. The Publisher's Forum from Lviv is a member of the Versopolis Platform led by Beletrina Publishing Institute; on the portal Versopolis we find also full profile descriptions of Andriy Bondar, Olena Huseinova, and Kateryna Kalytko with selected poems in English. The Future Architecture Platform led by Ljubljana Museum of Architecture and Design also involves CANactions that runs CANactions School for Urban Studies and the festival CANactions in Kyiv. The MENT Ljubljana innovative music platform produced by Kino Šiška Centre for Urban Culture, a member of the Innovation Network of European Showcases (INES), has recently hosted Koloah, an electronic music producer; Sasho Yerchenko from the Atlas Weekend Festival; and Dartsya Tarkovska (agency Soundbuzz).

Beyond Horizons: focus Ukraine In October 2018, the Motovila Institute organised a study tour for a group of cultural managers, artists and curators from Ukraine. The project is implemented under the Culture Bridges Programme funded by the EU and managed by the British Council in partnership with the European Union National Institutes for Culture (EUNIC) network in Ukraine. This is a follow-up event to the study trip of 23 representatives of the cultural sectors from Armenia, Georgia, Moldova and Ukraine who were introduced to a number of cultural producers and venues around Slovenia, hosted by Motovila in 2017 (see the report).

See a list of Ukraine-related articles and some relevant international organisations below.

The following 11 pages are in this category, out of 11 total.

This category contains only the following file.