The Okarina Festival is a world music festival, held in the alpine town of Bled since 1991. Presenting a very wide range of musicians, its focus spans from the many traditional folk genres to the more contemporary, hybridised idioms. The festival's creed is in part summed up by its name, which alludes to a very ancient wind musical instrument called the ocarina that can be found all over the world.

The festival is currently held at two venues – the Bled Castle and the so-called Bled Promenade, a grassy beach beside the lake. There, one can listen to those concerts that are free of charge. Additionally, the Bled Festival Hall is usually meant as a backup in case of rain. 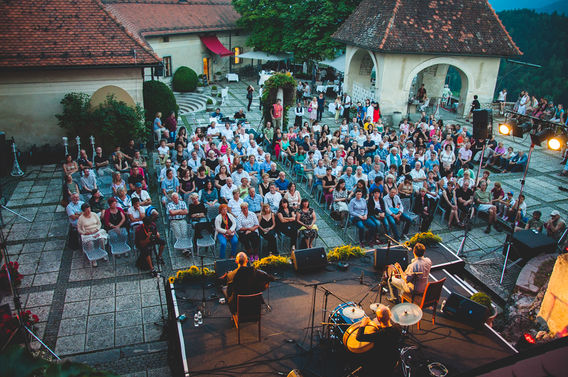 The founder of the festival is Leo Ličof, who even after half a century still acts as the main organiser and the artistic director of the festival. He set up its first few editions at the grounds of the restaurant he then ran on the shore of Lake Bled, but the following editions brought different venues.

While there were only a few bands on the bill at the start, the festival progressively grew and so did the names hosted. Some of the artists hosted during the early years of the festival were the legendary UK folk bands Fairport Convention and Pentangle and the singer Marta Sebastian (HU). 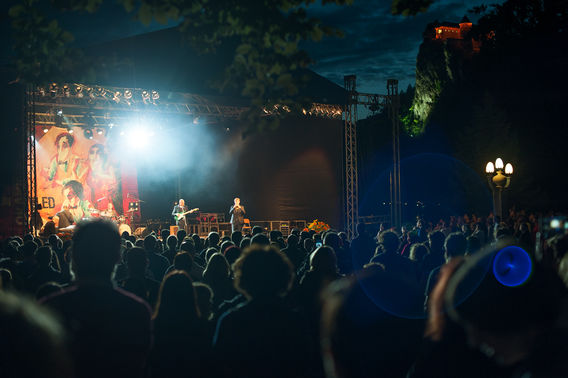 Recreating Middle Ages troubadour lyrics, the French trio Sirventes performed at the yard of the Bled Castle in 2016

Each year, a part of the Okarina Festival takes place on the shores of lake Bled

Bled Castle features as one of the main stages of the Okarina Festival Bled. Among other acts it also featured the Spanish singer Amparo Velasco alias La Negra, 2017