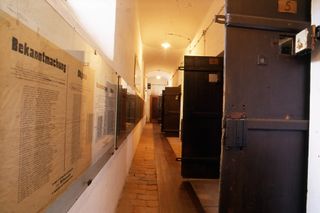 The Museum of Hostages in Begunje na Gorenjskem was founded by the Municipality of Radovljica in 1961 and incorporated into the Radovljica Municipality Museums in 1963. It is housed in the northwest wing of the Katzenstein mansion, where the cells of those condemned to death were located during the Second World War. The mansion, with its interesting history from the 14th century onwards, is now a psychiatric hospital. The museum is declared a cultural monument of national importance together with the Katzenstein mansion, the memorial park in Draga Valley, the avenue lined with chestnut trees, and the pavilions Jožamurka and Brezjanka designed by Slovenian architect Jože Plečnik.

Before the Second World War, the Katzenstein mansion was a women's mental hospital managed by the Sisters of the Society of St. Vincent de Paul. During the Nazi occupation from 1941 to 1945 it functioned as a Gestapo prison in which more than 12,000 people, including children, were imprisoned. On 4 May 1945 a detachment of the Partisan army took over the prisons in Begunje and set 632 prisoners free. This date marks a holiday in Begunje that is honoured with a commemorative ceremony every year.

Some of the former prison cells in the extension of the manor house have been converted into a memorial museum. The graveyard of hostages who lost their life here is located in the park and in nearby Draga Valley. The museum is an authentic monument to the horrors of war but is currently undergoing renovation.

Documented material and other objects show the life of internees and exiles in prisons and in certain concentration camps in years 1941–1945 and Nazi atrocities, committed on the local population. There are shocking written records of prisoners that have been left on the walls of the prison cells with the announcements of occupiers concerning the executions.

In the castle park and in nearby Draga Valley there are 667 organised burial places of hostages and Partisans. The two memorials are organised according to the plans of the architect Edvard Ravnikar. The artist sculptures Pripornik ("Detainee") and Talec ("Hostage") and Talka ("Female hostage") in the park of the castle are works of academic sculptor Boris Kalin (1951 and 1954).

The former bell of parish church, which was cast in 1923 by the Kranjska industrijska družba (Carniolan Industrial Company), is also exhibited as a monument of its own kind.