Podzemlje Pece, Tourist Mine and Museum 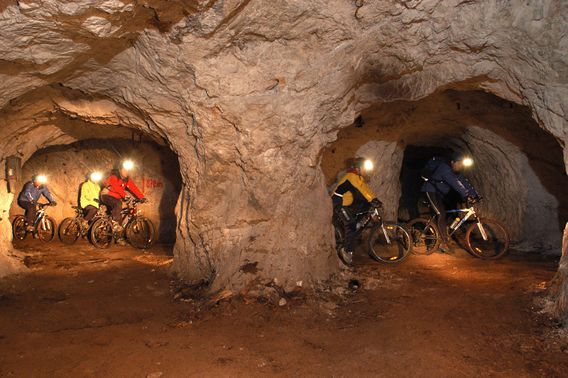 After its closure in 2004, the Mežica lead and zinc mine was turned into Podzemlje Pece, Tourist Mine and Museum which was nominated for the European Museum of the Year Award 2007. First notes about lead ore in this area are from 1424 and the first written sources about mining under the Mount Peca are from 1665. The old mine administration building of 1927, located in front of the mine entrance, has been converted into a museum with a number of collections (a mining exhibition and the collection of Maks Kunc, miner and photographer).

In the museum the miner's flat from the beginning of the 20th century was reconstructed. Among the exhibited minerals there is also the mineral wulfenite, oxide lead and molybdenum ore, named after Austrian mineralogist F. X. Wulfen (1728-1805). The yellow or reddish orange crystal and some other minerals of Mount Peca make a part of the mineralogy collection of the Slovenian Museum of Natural History in Ljubljana.

Part of the mine – the Moring mining area and the 3.5 kilometre-long Glačnik Tunnel which leads to it – has been preserved as a heritage site. An original miners' train takes visitors to the Moring mining area and the 15-minute journey is an incredible experience. The train stops in the centre of the Moring mining area, from where visitors can continue on foot with a guide. On a 1.5 kilometre-long path spiralling down between two horizons, the history of mining is presented to visitors. Mining equipment and a number of well-preserved machines are displayed on the very same spots where they were once used by the miners at work. Tunnels were also dug through the ore deposits, which is why there are still some remains of the glittering, grey coloured metallic lead ore.

In 2004 the museum got the Silver Sower Award by the Slovenian Tourist Board for an innovative and attractive tourist offer: an underground guided cycling tour that is about 5 km long. By the end of 2011 the underground canoe ride should be possible in the lower shafts of the mine that were flooded in 1994 when the production was closed and they stopped pumping out water.

History of the mine

Mining began in Mežica and the surrounding region in 1665. The establishment of the Kompoš-Brunner company in 1809 marked the start of the gradual transition to the industrial methods of obtaining ore, with subsequent mechanisation and the employment of an increasing number of workers. This is when the development of one of the largest lead and zinc mines in this part of Europe began. The ore deposits stretched across 64 square kilometres; the shallowest shafts were located at 2,060 metres, and the deepest at 268 metres above sea level (300 m under the Črna na Koroškem town). During the long centuries of mining, the miners dug up 19 million tonnes of ore, acquiring one million tonnes of lead and half a million tonnes of zinc. 1000 kilometres of tunnels had to be constructed for this. There were as many as 300 entrances into the mine. The gradual closure of the mine began in 1988 and was finally completed at the end of 2004.

A cross-border territory of around 1000 square kilometres and 51.000 inhabitants between the Peca and Košuta mountain comprises natural, technical and cultural heritage that offers lots of opportunities for geotourism. 14 municipalities from the region launched the Geopark project within the European Regional Development Programmes 2007-2013, Operational Programme Slovenia – Austria. The leading project partners are also the Podzemlje Pece and Obirske jame companies and the Koroška Regional Museum. The aim of the project is to develop the geopark to meet the standards of the European Geoparks Network that connects 43 members in 16 countries accross Europe. The geoparks recognised by the EGN are also members of the UNESCO Global Network of National Geoparks.

The old mine administration building of 1927, converted into a museum of the Podzemlje Pece, Tourist Mine and Museum in Mežica

The guided cycling tour along the Podzemlje Pece, Tourist Mine and Museum in Mežica

The mine shafts tour in the Podzemlje Pece, Tourist Mine and Museum in Mežica

The kitchen in the old mine administration house of 1927, Podzemlje Pece, Tourist Mine and Museum in Mežica

The bedroom in the old mine administration house of 1927, Podzemlje Pece, Tourist Mine and Museum in Mežica
Retrieved from "https://www.culture.si/w/index.php?title=Podzemlje_Pece,_Tourist_Mine_and_Museum&oldid=181179"
Categories:
Hidden categories: