The Praetorian Palace is a Venetian Gothic palace, situated in the old town centre of Koper. Located on the southern side of the main Tito Square, it houses the Municipality of Koper-Capodistria and a wedding hall. It is considered one of the town's architectural landmarks. At the corner of the side façade there is a Venetian bocca del leone, a stony plate with an opening, which served for anonymous messages to the mayor.

The venue functions both as a town hall and as a space for exhibitions and other cultural events co-ordinated by Koper-Capodistria Tourist Information Centre. The square is one of the locations of the Folkest Festival.

The predecessor of the current town hall was erected in 1254. The original was lost during a major revolt in 1348, so the construction of the second Praetorian or Praetor's Palace continued until 1380, when it was destroyed again. Building of a new town hall started in 1452–3 when the left wing of the palace and the porch leading to the picturesque Calegaria (Čevljarska street) was erected. The right wing was completed in the 1480s and the beautiful balconied Renaissance Porta del Corte was built in 1506, which connected the palace with the Foresteria, housing the University of Primorska.

During the Baroque period the Platea comunis (main town square) acquired its present-day aspect, and the reconstruction of the Praetor's Palace façade in 1664 gave the palace a more sophisticated and harmonious appearance. The palace lost much of its importance due to the fall of the Venetian Republic under the Napoleon regime in 1797. The Austrians moved the municipal seat to the Armeria Palace in the 19th century, and the palace continued to decay until 1968, when it was restored in situ. Recent reconstruction works were undertaken by the Municipality of Koper-Capodistria in 1991–2001 partly with funding from the EU Phare programme.

The Tito Square is one of the most harmonic squares in the former Venetian Republic. It is surrounded by the most important monuments of the 15th century, including Praetorian Palace, Armeria, and Foresteria Palace, a lodge, and a Cathedral. Throughout history, it has been the centre of life in Koper.

The palace consists of a porch and two wings. The main façade facing north is picturesque with many plaques, coats of arms, and busts in built-in niches. It is structured with a balcony and a stony stairs leading upwards to it, the gable is ended with mouchettes and stressed with the allegory statue of Justice. At the eastern wing façade a quadrifora is built in. 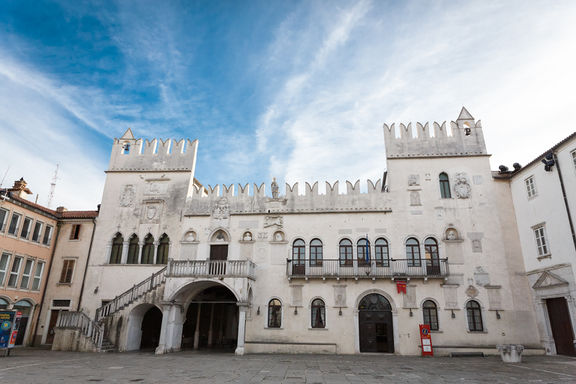