Musicians, rappers, event hosts, comedians, social commentators, theatricals, but Jure Karas and Igor Bračič are probably foremost known as a musical duet Slon in sadež [The Elephant and the Fruit]. The duet was - after many years of the members meeting on improvised theatre stages - established in 2001 at the Ana Desetnica International Street Theatre Festival in Ljubljana.

Named after an elaborate joke, they perform comical music of varied genres which is often socially and politically charged. Early in their career, they've released a controversial and at the same time quite popular song titled "Taliban Reggae", which has given them some fast media recognition.

In 2003, they published their first album Kabáre. After that, they've been a bit irregular in releasing music, which sort of makes sense as they tend not to take things very seriously. With this attitude in place, even their albums in themselves can be self-ironic jokes, as seen in their 2010 release Sponzorska plata [Sponsored album], that was also a commercial for a diary producer.

In their music and performances, they touch on topics such as family violence, drug prohibition, Slovenia's entrance into NATO, and violence in Guantanamo Bay. They have also made a few parodies to popular Slovene turbo folk songs. They mostly target Slovene audiences and subsequently perform in that language, but they have also performed in English (their hit "Taliban Reggae") and in Serbian/Croatian when they've seen fit.

In 2002, the band staged its musical performance Kabáre at KUD France Prešeren Arts and Culture Association and subsequently also performed it at Lent Festival, Rock Otočec, the Maribor Theatre Festival and many others, more or less Slovene stages.

They have sometimes been joined by other members: Matjaž Ugovšek (nicknamed Ugo), Igor Brvar (Jovo) who later left the group, Rok Šinkovec and Rok Kovačič - Fish. Matej Horvat and Samo Šalomon played in the group in 2007 and 2008.

Slon in sadež seem to be firmly entrenched in Slovene pop culture, but they also seize every opportunity to mock it and take it less seriously than it takes itself. Besides the role of musicians, they often find themselves functioning as event hosts, script writers, and advertisers. They have been awarded 3 main prizes by the Slovene Advertising Festival (SOF) and the Effie Award (marketing communications efficiency award) for their endeavours in advertising production.

In 2004, Slon in Sadež received the Slovene media prize Viktor Award for prominent media personalities. In 2008, they hosted this same award show for the first time.

They have also hosted their own "Radio Slon in Sadež" show on the Slovene commercial radio station Radio Center. There they put on whimsical broadcasts which often consisted of poking fun at numerous and various Slovenian local speeches. They've published a collection of these sketches in 2009. 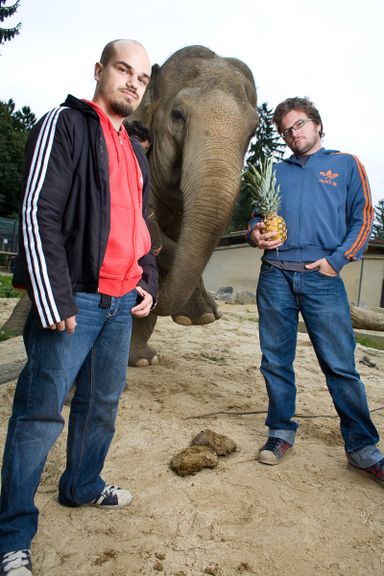