Originally founded in 1136 by Peregrin, Patriarch of Aquileia, the Stična Cistercian Abbey is one of the earliest Cistercian monasteries and the only European monument of its kind with so many preserved architectural elements (a church and a cloister). It served as the religious, ecclesiastic, cultural and economic centre of Carniola up to the reforms of Joseph II von Habsburg in 1784, when all monasteries were closed by decree. The white monks only came back to Stična in 1898. In 1991 the Slovene Museum of Christianity opened within the monastery complex.

The first monks arrived in 1132 from Burgundy, along with the architect Michael, responsible for the construction of the monastery complex.

The abbey's oldest architecture belongs to the High Romanesque period but some original forms resemble the Early Romanesque style from central France, as this territory used to be under the direct influence of Cluny II. Some parts of the abbey were expanded between the late-16th and mid-18th centuries. Before disbanding, the monastery held a library with 1,827 units, including the valuable illuminated Stična manuscripts in Latin, dating from the 12th and 13th century, and the important Stična Manuscript [Stiški rokopis] of 1428 with one of the first texts in the Slovenian language.

In 2002–2005 conservation and restoration work encompassed the cloister and its garden, and generated new insights on its early phase, including findings of many Romanesque "spolia" and a lavatory foundation.

The monks (currently 14) continue their centuries-old tradition in the Cistercian spirit of Ora et labora: caring for the spiritual growth in the parish; writing and publishing spiritual books, that is, the serial publication Bernardova knjižnica [Bernard's library]; dealing with theological science and organising symposia, often of international importance; physical working in the garden and orchard; managing Home for Spiritual Exercise [Dom duhovnih vaj]; maintaining the tradition of singing the Gregorian chant. The monastery's pharmacy, sharing the same fate as the library, was re-created in the 20th century by Simon Ašič, a healer and expert of medicinal herbs. 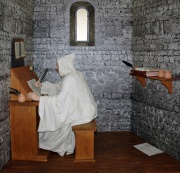