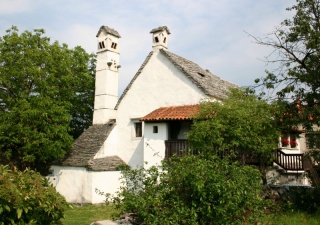 The Škratelj Homestead is an ethnological monument that represents not only architectural and regional cultural heritage but is also is the birthplace of the first Slovene film star Ida Kravanja (stage name Ita Rina) who in the late 1920s starred in the film Erotikon (1929) by Czech director Gustav Machaty, which enjoyed major box-office success both in Europe and in the USA.

The permanent exhibition on the actress, conceived by the Slovenian Cinematheque Museum Department and installed on the first floor of the homestead in 1998, has been expanded into the Museum of Slovenian Film Actors. The project has been supported by the Ministry of Culture and the Municipality of Divača, while the renovation works on the Škratelj's homestead were supported by the donation of Norway through the Norwegian Financial Mechanism.

The Škratelj Homestead and its courtyard (borjač), a well-preserved monument of 17th-century Karst architecture, represent the peak of the spontaneous folk architecture in the region. In the early part of the 20th century the homestead was the biggest and the most important house in Divača, a village resting on the edge of the Divaška Valley.

In 1998 the Municipality of Divača, in collaboration with the Slovenian Cinematheque and the Institute for the Protection of Cultural Heritage of Slovenia, Nova Gorica Regional Office, transformed part of the Škratelj Homestead, the residential building called the Škratelj House, into a museum in which the permanent exhibition on the actress has been installed. The exhibition offers an insight into the life of Ita Rina and the development of Slovene cinema during her day.

The Museum of Slovenian Film Actors was inaugurated in July 2011 and includes a small cinema hall for screenings and workshops.