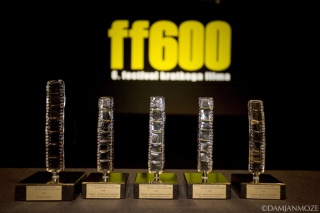 The FF600 Film Festival, an annual international competitive film festival focusing on short film production was established in 2005 by Dharmafilm Society which has been organising it up to 2010.

The submitted films (call for entries is open) were selected by the selection committee and later divided into 6 categories: animated film, music videos, one-minute films, experimental films, short fiction films and short documentaries. The best film in each individual category wa awarded by the 3-member jury (composed of film professionals). The jury also selected the best film of the festival (from among all of the screened films) and awards it with the Grand Prix. The Dharmafilm Society arrange for awarded films to be screened at other film festivals around Slovenia and in other European countries.