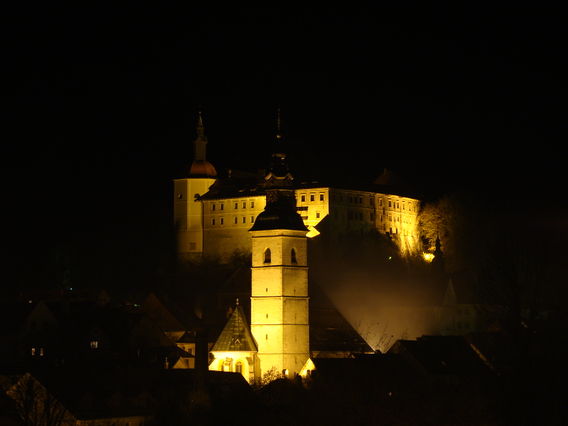 In the 12th century on the hills above Škofja Loka stood three fortifications: the Upper Tower on Krancelj; the Lower Fort (nider vest); and the Loka Castle, a residence of Freising Bishops, built at the brink of a natural terrace. The castle is first mentioned in 1202 as castrum firmissimum, although today's building dates from the 16th century. The castle was rebuilt in 1691 after an earthquake and in 1716.

The castle was administered by Loka chiefs, among them Lambergs, Thurms, and Rasps. Since 1890 the castle has been managed by the Ursulines, who pulled down the Romanesque yard tower and transformed it into a school. Since 1959 it has hosted the Loka Museum.

The circular castle dominates above Škofja Loka town and presents the conclusion of the town walls. It can be dated after the earthquake in 1511, although some parts are older, which was confirmed during the renovation works in 2006–2008. The north-eastern tower, the oldest in the structure, is built on an older predecessor from the 10th century. Together with the renovation work the reconstruction of the primary entrance with a wooden drawbridge was also carried out. }}

Loka Castle and its surroundings, winter 2012

The view of the Loka Castle located in Škofja Loka. Since 1959 the castle serves as the main venue for the archaeological, ethnological, art history, and other collections of the Loka Museum .
Retrieved from "https://www.culture.si/w/index.php?title=Loka_Castle&oldid=252391"
Categories:
Hidden categories: