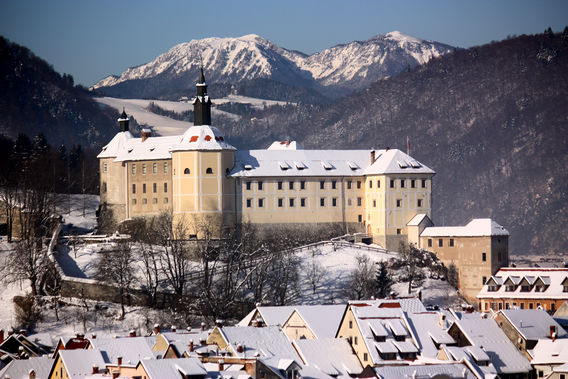 In 1939, the museum collection was presented to the public in the premises of the town hall in Mestni trg and the Škofja Loka Museum was thus founded. The collections concerning the former Loka seigniory under the Freising Bishops' authority between 973 and 1803 remain the most important. Since 1959, the museum resides in the picturesque Loka Castle where the historical, archaeological, ethnological, natural history, art and sports collections are displayed. There is even a permanent media display about the Škofja Loka Passion Play. These permanent exhibitions pay tribute also to important personalities that transgress the local character: the impressionist painter Ivan Grohar (1867–1911), writer and politician Ivan Tavčar (1851–1923) and his wife Franja Tavčar (1868–1938), herself an influential active social-minded worker, humanitarian and politician.

An open-air museum, launched in 1962 in cooperation with the Museum Society Škofja Loka, is situated at the castle park. It consists of four vernacular buildings, including the wooden Škopar House from the 16th century, a mill and a lapidarium.

In 1936, an exhibition on crafts and industry took place in Škofja Loka. Soon after, the local Museum Society was founded. The society's goal was to collect as many works of art and antiques as possible in the town and its environs and, simultaneously, to obtain suitable premises to exhibit these objects, the latter was realised in the Škofja Loka town hall in 1939, and the Loka Museum was first established.

In 1946, after World War II, the Loka Museum was allocated its own premises in Puštal Castle, in which the collections were exhibited. In 1959, the museum moved to its present location in Loka Castle. The displays of the collections have been renovated several times. Among the more recently renovated are the Ivan Tavčar and Ivan Grohar rooms. In 2017, the Škofja Loka Passion Play permanent exhibition as well as the Sports in the Area of Škofja Loka collection were added, the latter as a result of a close collaboration with the local community. 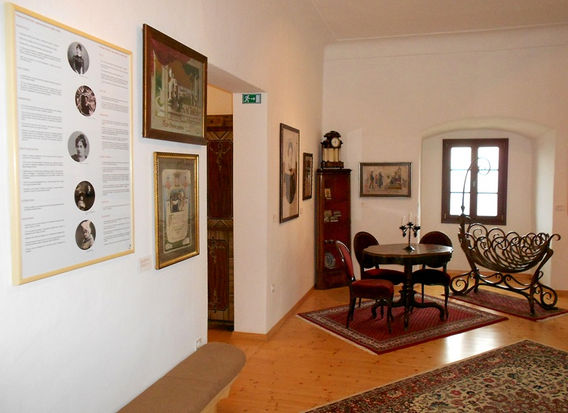 The museum focuses on the cultural heritage of the Škofja Loka region. It cooperates with other organisations and local communities as well as with private owners of cultural collections in order to present the collections and to offer them expert help. A special collection on beekeeping and the permanent exhibition Lazy bums, be more like the busy little bee foraging for food with glee, conceived in collaboration with the Škofja Loka Beekeepers' Association, is one of such regional development projects. It is displayed at the association's premises in Brode in the nearby Poljanska Valley.

The museum also carries out a wide range of educational activities for all age groups, such as workshops, lectures and guided tours of its exhibitions. For this purpose, a set of regular topical programmes was conceived, which take place in the Museum's "Living Room".

Apart from the venues at the Loka Castle, which include the Chapel, the Castle Gallery and the Round Tower for temporary exhibitions, the public institution also manages the France Mihelič Gallery, the Ivan Grohar Gallery, the Cankar Battalion Memorial Room in Dražgoše, and an open-air museum at the castle park.

Major exhibitions include a collection of archaeological artefacts dating back to the Bronze Age; an important collection of medieval documents, which contains the donation deed of 973 from Emperor Oton II to Bishop Abraham confirming that the Loka territory (the river basins of both Sora Rivers and the Sora Plain) belonged to the Bavarian Bishopric of Freising for no less than 830 years; two Renaissance inscription slabs from 1513, one of which depicts the Škofja Loka coat-of-arms and bears witness to the reconstruction of the town after an earthquake; and a guilds' collection which presents the heritage of the Loka guilds, the oldest being those of tailors, shoemakers, furriers and potters, and displays deeds, small chests, jugs, a signet ring, banners and signboards.

The art history collection comprises works of art dating from the 14th century to contemporary art by the younger generation of local artists. The core of the presentation of medieval art consists of numerous copies of frescoes from the churches of Suha, Križna gora and Crngrob; from the latter originates the famous Holy Sunday fresco, created by the workshop of Janez Ljubljanski during the mid-15th century, which depicts Christ suffering on the cross, surrounded by instruments of torture, and scenes from the everyday life of peasants, craftsmen, merchants and nobles.

In the castle chapel, four gilded altars are presented, originating from the church of Dražgoše, which was burnt down in 1942. The altars illustrate the development of woodcarving in the region in the 17th century from a mannerist architectural design to richly-decorated High Baroque altars.

The modern and contemporary art collection has been a vital part of the museum's scope and is unique in its consistency. This special collection includes the works of the Šubic family of wood sculptors and painters from Poljane (Štefan, Janez Sr, Janez Jr, Valentin, Jurij, Rajko, Mirko, and Ive Šubic). Ivan Franke, France Košir, Maksim Sedej, Gvidon Birolla, Gojmir Anton Kos, Franc Novinc, Herman Gvardjančič, Metod Frlic, Maja Šubic, Tina Dobrajc and many others are also represented in the collection.

Special attention is given to Ivan Grohar (1867–1911), the impressionist painter. In 2017, the exhibition presenting his early opus and life was set anew.

The ethnological collection of the Loka Museum is one of the largest in Slovenia presenting the life of peasants and burghers in Škofja Loka before industrialisation. Exhibits comprise objects used in the past in agriculture and cattle breeding, in the preparation of food, and in transportation. The open-hearth kitchen displays tools and accessories related to cooking and baking, as well as various old lamps.

Special attention is given to the trades that used to be crucial for the survival of Loka inhabitants: bobbin-work for lace, the sieve maker's trade, the hat trade, the linen trade, dyeing and printing linen, the making of artificial flowers, and the baking of decorated honey pastries – mali kruhek – a traditional speciality of Loka made of honey dough, shaped in moulds or by hand.

The historical development of the eight traditional trades is meticulously presented to visitors depicting all phases of work, product trade and social circumstances in which craftsmen worked.

The bobbin-lace making was introduced at Loka territory in the 2nd half of the 19th century, linked to the older tradition of the Idria region. It spread over the Poljanska and Selška valleys, with centres in Žiri and Železniki. At the beginning of the 20th century, three schools of bobbin-lace making were founded in the region by the Vienna Central Institute for Women Handwork: the first one was opened in Žiri (1906), then in Železniki (1907) and also at Trata near Gorenja vas (1909). The schools' programme focused on the techniques and products which were interesting for the market. 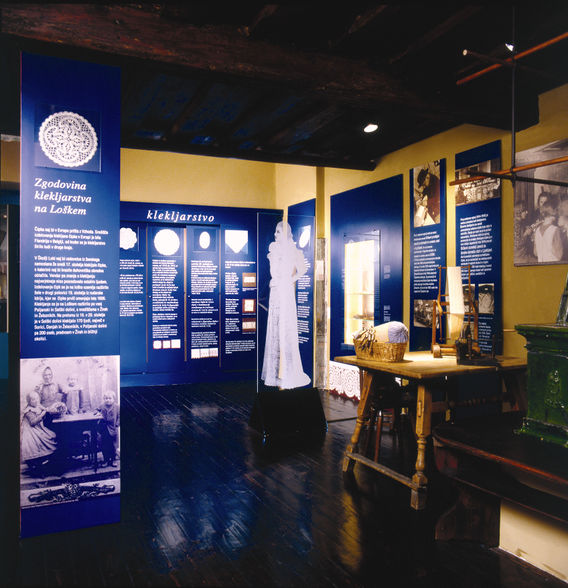 Other important exhibitions include a cultural history display, which presents a survey of the development of education in the Loka region and a collection of burgher ceramics from the 16th and 17th centuries. The museum houses the facsimiles of the Škofja Loka Manuscript and the documentation of an important part of the region's intangible heritage, the Škofja Loka Passion Play performances in 1936 and 1999.

A recent history collection presents the Loka region in the 20th century. Activities during World War I, the strike actions between 1935 and 1936, the Dražgoše battle during World War II, and the national liberation movement are some of the topics presented.

The recent permanent display presents the role of sports activities in the region. The history and development of the variety of sports disciplines are on view, ranging from basketball (introduced by the Ursulines at the very Loka Castle) to skydiving. The exhibition ends with a wall of fame that includes internationally successful competitors such as skier Jože Kuralt, athlete Brigita Langerholc, footballer Jan Oblak. The exhibition was initiated and prepared in close and long-term collaboration with local enthusiasts.

Ivan Tavčar in the Loka Museum

The legacy of the native, politician and writer Ivan Tavčar (1851–1923) and his wife Franja Tavčar (1868–1938), also an influential and active citizen, is displayed in a separate room at the Loka Castle, furnished with Kalan's furniture from Visoko, the setting of Tavčar's novel Visoška kronika (The Visoko Chronicle). The Tavčar collection was refurbished in 2012.

In collaboration with the Ljubljana Regional Office at the Institute for the Protection of Cultural Heritage of Slovenia and the Municipality of Gorenja vas-Poljane, the Loka Museum has also prepared permanent displays on the Tavčar couple at their former Visoko Mansion, where their tomb is also located.

The view of the Loka Castle located in Škofja Loka. Since 1959 the castle serves as the main venue for the archaeological, ethnological, art history, and other collections of the Loka Museum . 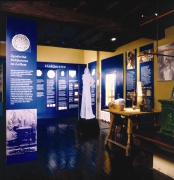 The bobbin-lace collection at the Loka Museum, Škofja Loka, 1998

A bronze candlestick in the form of a medieval page from 1400 was one among the numerous small representative objects found at the Upper Tower on Krancelj.

A part of a permanent collection dedicated to the Impressionism painter Ivan Grohar was set anew in 2012. Loka Museum, Škofja Loka, 2013

A room dedicated to Ivan Tavčar (1851–1923), the native, politician and writer is furnished with Kalan's furniture from Visoko. A part of the Loka Museum in Škofja Loka, which was set refurbished in 2012.
Retrieved from "https://www.culture.si/w/index.php?title=Loka_Museum,_Škofja_Loka&oldid=254966"
Categories:
Hidden categories: