The Idrija Municipal Museum was founded in 1953 as the Museum of Idrija and Cerkno. It is housed in the Gewerkenegg Castle, which dominates the old centre of the town. The 16th-century castle had been mostly a seat of management and administration for many centuries of the second oldest and largest mercury mine in the world, which dates back to 1490. The museum's main aim has been to preserve, present, and research the rich technical heritage of the mercury mine and the ethnological features of the life of miners and peasants of this region that lies on the borderline between the Karst and the pre-Alpine hills.

The museum is responsible for the area's natural sights and technical, ethnological, historical, and cultural monuments, as well as for the major monuments of the National Liberation Struggle from the Second World War. It also administers the Cerkno Museum and the France Bevk Homestead in Zakojca, and publishes the Idrijski razgledi Magazine.

In 1997 the Idrija Municipal Museum received the Luigi Micheletti Award, as the best European museum of industrial and technical heritage. 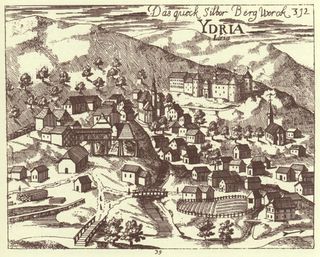 Exhibitions on the Gewerkenegg Castle

The central museum exhibition with the title Five Centuries of the Mercury Mine and the Town of Idrija presents the development of the town of Idrija and 500 years of the second oldest and the largest mercury mine in the world. While operating, the mine produced one-eighth of all mercury in the world. The exhibition is thematically divided into 11 sections with 25 exhibition rooms covering a total area of more than 1,300 square metres.

The Collection of Rocks, Fossils, Mercury Ores and Minerals, with nearly 3,000 different specimens is the biggest exhibited collection of its kind in Slovenia. Documents Tell the Story and View of the Town in the front tower of the castle exhibit a selection of significant archival sources from all over Europe along with documents of Idrija cartographers and mine maps from the 18th and 19th centuries.

Mercury Tower, is highlight of the exhibition and is designed like a shaft with three levels. Each level presents different symbolic values in the work of the miner. Equipment, ways, and customs before entering the shaft. The second level presents work, working conditions, tools, miners at work in the 17th century, etc. And in the lowest part, a treasure here hangs in the air on iron wires, represented by a 320kg transparent Plexiglass cube with drops of mercury inside.

Famous Personalities, show portraits and documents relating to the activities of all those workers, intellectuals, and mining experts who came to or lived in Idrija and influenced Slovenia's and Europe's science and culture at large. For instance in Idrija were the naturalists Scopoli, Hacquet, and Paracelsus.

The process of extracting mercury and cinnabar is illustrated in a room with a massive millstone used for grinding cinnabar, clay retorts for blasting ore, and original mercury scales from 1830. An important support industry for mining is foresting, and Idrija is surrounded by hills and forests that were cut for centuries for shaft support and mining architecture. Wood was also exported and the Idrijca River and its mouthing streams were used as transport routes. Architecture and technical solutions are vividly presented by various models of water dams, barriers, and water rakes to pool incoming wood. The facilities shown in the models can still be visited in the town of Idrija or in surrounding areas.

Witnesses of Life's Beat presents the lively social and cultural life in the Idrija of the past. The Idrija Brass Music Association with over 350 years of tradition found its permanent tribute in the museum. The mining operation was responsible for the establishment of several very good local schools as well as craft traditions such as lace-making. Bobbin-lace making was introduced into Slovenia from the Czech and German lands of the Austro-Hungarian monarchy more than 300 years ago; the first mention goes back to the year 1696. Idrija gradually developed its own techniques and design patterns. In 1876 a lace school was established and its activities achieved European dimensions. Lace was exported worldwide the same as mercury.

A part of the museum is the Memorial Room of France Bevk, the famous Slovene writer, that was donated by his wife after his death in 1971. His study was moved from Ljubljana to the museum's permanent exhibition at Gewerkenegg Castle the same year.

On display in the Idrija Municipal Museum is a relief model of the Partisan Hospital Bolnica Pavla, the less-known, but no less important hospital where more than 1600 Partisans were treated.

On the castle the museum runs also two separate exhibition spaces, the Small Gallery [Mala galerija] and the Nikolaj Pirnat Exhibition Space [Razstavišče Nikolaja Pirnata]. Specific research projects such as The 50 years of Basketball in Idrija (2019) as well as contemporary artworks are exhibited there.

The museum works closely with the Idrija Mine Museum and the Municipality of Idrija to run numerous sites (the theatre, a warehouse, the city hall, Gewerkenegg Castle, miners houses, the water barriers klavže, etc.). In 2007 the whole complex was added to the tentative list of the UNESCO world heritage sites under the title Idrija on the Mercury Route of the Intercontinental Camino Real, while in 2012 the nomination, this time as Heritage of Mercury by Idrija and Almadén, was successful.

The museum therefore oversees the activities of various satellites showing works which were necessary to maintain mine shafts, wood cutting and transport: the Flood Dams, Klavže in Idrija, built in 1772; Francis's Shaft, the museum's technical department, a mine shaft that has 15 of the most modern battery and steam machines for pumping water out of the mine from the 19th century to the early-20th century. It has the biggest water pump, known as Kley's Pump, made by the E. Škoda Pilsen factory (Plžen, Czech Republic) in 1893 and operated until 1948. After being repaired and renovated, the pump was opened again for the public in 2009. The Idrija Kamšt (from the German word Wasserkunst – "water art"), the largest wooden water wheel in Europe which pumped water from the mine from the time of the French Revolution all the way till 1948. It was restored and reopened for public viewing in September 2009. The Idrija Miner's House dating from the end of the 19th century was renovated in 1990.

The museum cares also for the World War II heritage, the Franja Partisan Hospital and the Slovenia Partisan Printing Shop in Vojsko. The Printing House operated from 1944 till the end of the war, and Partizanski dnevnik [The Partisan's Daily] was the only daily newspaper in occupied Europe printed by a resistance organisation.

Dairying accessories, The Cerkno Region Through the Centuries permanent exhibition at Cerkno Museum presenting the historical development of the Cerkno region, 2004

Mill wheel, The Cerkno Region Through the Centuries permanent exhibition at Cerkno Museum presenting the historical development of the Cerkno region, 2004

Prison doors, The Cerkno Region Through the Centuries permanent exhibition at Cerkno Museum presenting the historical development of the Cerkno region

PUST IS TO BLAME! – A Story about the Cerkno Laufarija (Laufarija are carnival figures particular to Cerkno), exhibition, Cerkno Museum

"Ta terjast", PUST IS TO BLAME! – A Story about the Cerkno Laufarija exhibition, (Laufarija are carnival figures particular to Cerkno), exhibition, Cerkno Museum

PUST IS TO BLAME! – A Story about the Cerkno Laufarija (Laufarija are carnival figures particular to Cerkno) exhibition, Cerkno Museum

"Laufarji", PUST IS TO BLAME! – A Story about the Cerkno Laufarija (Laufarija are carnival figures particular to Cerkno), exhibition, Cerkno Museum

The Cerkno Museum was established by Idrija Municipal Museum in 1978 as a branch museum about the NOB (National Liberation Struggle). The institution studies the rich heritage of the Cerkno region in an integral way

The exterior view of the Franja Partisan Hospital

A replica of a 6 sqm large lace tablecloth, ordered and made in 1976 by 14 Idrija lacemakers from 34.560 metres of cotton tread for Tito's wife Jovanka who has never received the gift. Exhibited at Idrija Lace Festival, 2008
Retrieved from "https://www.culture.si/w/index.php?title=Idrija_Municipal_Museum&oldid=256182"
Categories:
Hidden categories: