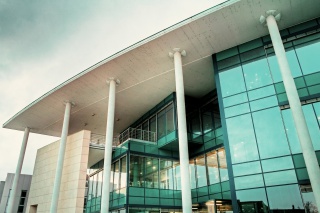 The Murska Sobota Regional and Study Library functions as the regional library for the Pomurje region. Though officially established in 1973 following the merger of the public and the study libraries, its beginnings pre-date World War II. The 4,000 square-metre premises feature a 120-seat reading room and function both as a library and as a multimedia information centre. In addition to lending book and other material, the library also holds story-telling hours, creative workshops, literary evenings, exhibitions, books clubs (in the library and nursing homes), lectures, and participates in organising the Eye of the Word Festival. It houses two important collections: a local collection comprising rare books hailing mostly from the 18th and 19th centuries, and one of the richest collections of Hungarian books in Slovenia, which is perennially updated with new titles. Their mobile library pays visits to 12 Slovene municipalities and the neighbouring Porabje region in Hungary.

The library is also the seat of the Library Association of Pomurje.