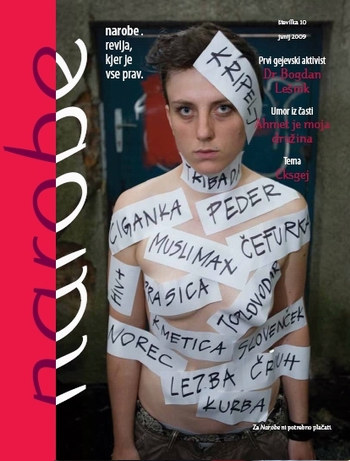 The magazine Narobe (Wrong) has been published since April 2007 by the Association Information Centre Legebitra from Ljubljana. The publication with the sItalic textlogan "The magazine, in which everything is right", covers the topics that concern the gay, lesbian, transsexual, bisexual and queer population, including socio-political debates, activism, everyday life, alternative lifestyles, cultural events and many interesting interviews. The magazine promotes tolerance and cross-cultural cooperation and is currently the only magazine specialised for the LGBTIQ population since the magazines Kekec, Lesbo, Revolver, and 1xy have ceased to exist.

From 2007 until 2016, when it ceased to be published, Narobe was the only regularly released alternative community print LGBT medium. It was published four times a year in a print run of 800 copies. The first and only editor of the magazine was Dr Roman Kuhar. In 10 years, 32 issues were published, and 141 writers wrote for the magazine. In addition to the magazine, the articles were also published on the Narobe blog, which is still available at the Narobe website.