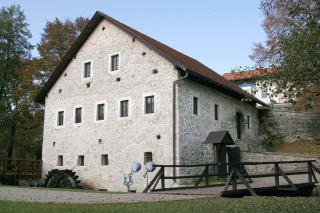 Trubar Homestead was opened in the village of Rašica, near Velike Lašče, in 1986 on the 400th anniversary of the death of Primož Trubar (1508–1586). He is considered to be the founder of the literary Slovene language and was the leader of the Protestant Reformation movement in Slovenia.

Though a very important figure in his time, not much material evidence is left of his life in Rašica. Consequently, he is presented through copies of his books and some other documents and artefacts connected with his life. That is coupled with stained glass portraits of his famous contemporaries, including some of the rulers of the time. Though lacking any significant material legacy, the guided tours offer an extremely informative insight into the historical contexts and the rather epic story of Primož Trubar.

Next to the main building are a traditional Slovene kozolec ("wooden hay-drying rack"), a water-driven Venetian sawmill, the Skedenj Gallery and a well-kept park area. The former stables have been turned into an inn and the granary into a reception and a shop.

Led by Trubarjevi kraji Public Institute, the Trubar Homestead is not actually located on the spot of Trubar's birthplace (which featured a mill as well), but a couple hundred meters lower down the stream. Nothing but some ruins remain of the actual Trubar's mill. The Temkov maln ("Temk's Mill") nevertheless seemed as good a place as any, as it dates back to approximately the time of Trubar's life and was also run by his relatives.

The mill at the Trubar Homestead is ethnologically probably its the most curious piece, being about 200 years old and the only remaining mill of the many that comprised the at one time very active local wood-cutting industry. 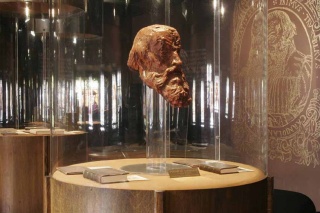 The Trubar Homestead in Velike Lašče dates back to approximately the time of Primož Trubar's life and was also run by his relatives. Exterior in 2006.

Primož Trubar's head and the books, a part of installation at the Trubar Homestead museum in Velike Lašče, Slovenia