The Central Technological Library (CTK) is a higher education library of the University of Ljubljana. Established in 1949, it introduced computer support as early as the 1980s. Today it aims to develop hybrid library forms (more whole-text databases and CD-ROMs and fewer printed publications) and distance learning methods. Its focus is on technical literature and it boasts broad international experience, being the main library and information centre on the natural sciences and technology in Slovenia. The free-access library also offers a wide range of literature on architecture, covering specialised fields like scenography or theatre architecture. The CTK holds also a collection of the former German Library.

The library is the seat of the Library Association of Ljubljana.

The library holds a considerable collection of books, among them textbooks, monographs, conference proceedings, handbooks, and encyclopaedias, as well as a collection of scientific periodicals, comprising the most significant titles from the fields of technology and natural science, many of which are available in electronic form. The library boasts over 100 different electronic information sources, including bibliographic databases, collections of electronic books, magazines, journals, dictionaries, patents, and other materials.

The German Library (Nemška knjižnica), formerly known as the German Reading Room, founded under the auspices of the Goethe-Institut and co-funded by the Ministry of Culture of Slovenia, holds over 5,000 books including titles dedicated to German architecture, design, literary theory, humanities and social sciences as well as over 30 German magazines.

With a total area of 2,900 square metres, the library incorporates 130 reading room seats and 17 computers, offering access to a wide spectrum of literature. The premises allow University of Ljubljana students to access the wireless Eduroam network. Around 80 per cent of the members are university students. In January 2012 the Central Technological Library became the first library in Slovenia open until midnight.

Since 1988 the library has been part of the national library network COBISS - Slovene Virtual Library system and a member of many international professional associations, such as the International Federation of Library Associations and Institutions (IFLA), the International Association of Technological University Libraries (IATUL), ASLIB, the UK Serial Group (UKSG), the National Acquisition Group (NAG), and the Ligue des bibliotheques Européennes de recherche (LIBER).

The library has participated in the Copernicus programme, the Establishment of Electronic Information Services in the Countries of Central Europe project, and the New Independent States project co-ordinated by the German National Research Centre for Information Technology. The German Reading Room was founded in 1995 under the auspices of the Goethe-Institut Ljubljana. Contracts for inter-library exchanges are signed with all important information centres in Europe (BLDSC, BLOSRIS, TU Delft, Subito, Ann Arbor, etc), and IFLA Voucher and bank card payment systems have been implemented.

International projects in the field of digital library development, information systems, and library and knowledge management are underway. The Central Technological Library has considerable experience in conference organisation, at both national and international levels, and hosts specialised library meetings and international conferences. 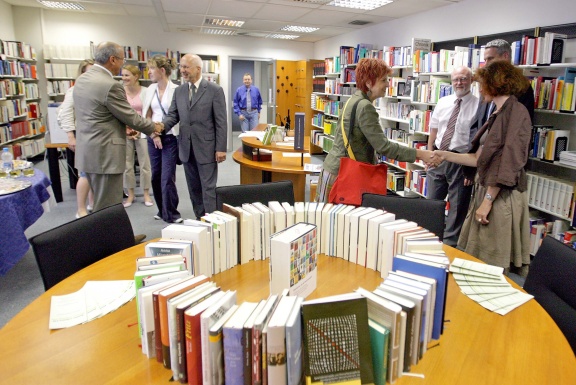