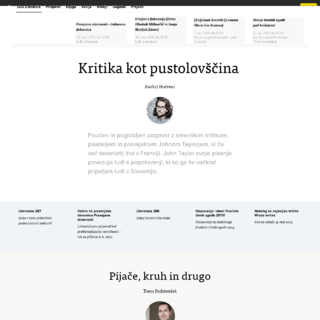 Originally launched as a section of the journal Problemi called Problemi-Literatura, Literatura journal became autonomous in 1989 with the establishment of a literaty artistic association, LUD Literatura. Since 1993 it has appeared monthly. Its editorial emphasis is on the presentation and commentary of new developments in contemporary Slovene as well as world literature. Almost three hundred issues in nearly two hundred volumes of the magazine have been published in almost 25 years. In recent years, it has been published in eight volumes, each with four single and double issues per year.

Year 2019 marks the thirtieth anniversary of the beginning of its independent publishing, in order to celebrate they launched the competition for an essay on new Slovene literature.

The table of contents of each number is available at the journal's official website. Registered users can also access full articles online.