The Slovenj Gradec Unit of the Koroška Regional Museum was originally established in 1951 as the district museum of the National Liberation Front. Its foundation is connected with the activities of teacher Bogdan Žolnir (1908–1997), who became the first director of the museum. In 1956 the museum was moved to the second floor of the former town hall. In accordance with new specific needs connected with the protection of the natural and cultural heritage after 1986, it was transformed into a general regional museum. The museum was rehoused in 1991 and additional departments for archaeology, education, conservation, and restoration were formed. Other departments include history, culture and art history, documentation, and ethnology. In 2002 the museum was merged with the Ravne na Koroškem Museum into the Koroška Regional Museum. 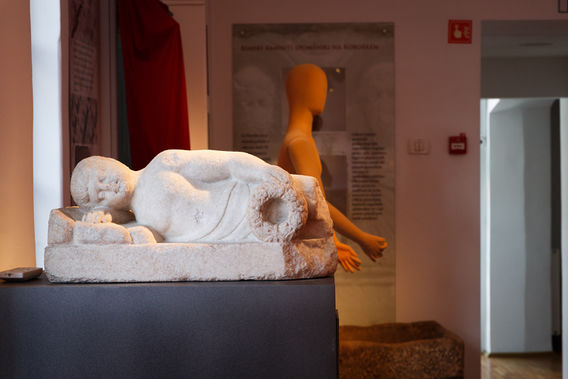 Mission of the museum

The museum engages in general research work on early Carinthia and on the way of life in this part of Slovenia. This work is regularly published in magazines and in the museum's own publications. The museum has extensive archives with a good collection of photographs (about 30 linear metres of archival materials and written records), a large library (with about 4,000 units of materials), and restoration workshops for wood, metal, and pottery as well as modern depots (in the former primary school at Podgorje) with about 8,000 exhibits, of which 6,700 have been placed in the inventory and a large number renovated.

The museum acquires materials through purchase, bequests, donations, and archaeological excavations. Some of these materials compose rich and interesting thematic collections. The museum has presented its activities in a number of temporal exhibitions and, in recent years, has also housed some exhibitions of other institutions. In this way it attempts to address the audience at large. Additionally, it is always ready to offer consulting services for public and private collections. Tourism and the promotion of natural and cultural heritage remain an essential part of all of its endeavours. The Koroška Regional Museum in Slovenj Gradec takes care of numerous collections (7 major ones), permanent exhibitions (25), and archaeological parks (4), as well as installs temporary exhibitions.

As the preservation of cultural heritage is also one of the museum's major tasks, they also manage the Forma Viva Open Air Steel Sculpture Collection of the steel sculptures which were made by international artists visiting the sculpture symposia and manifestations under the Ravne Steelworks sponsorship from 1964 to 1989.

The Koroška Regional Museum in Slovenj Gradec prepares a substantial number of temporary exhibitions mainly connected to the research carried out by its museum experts. To name some from 2008: World of the Living – World of the Dead, an archaeological exhibition of antique findings in the Koroška Region; A Man Around The Globe, A Bee Around The Flower, an exhibition on Slovene apiculture (bee-keeping) from the 18th century on and presents bee-hiving and the main characters of this craft, many would say art: Peter Pavel Gantar, Anton Janša, Janez Anton Scopoli, and others. Also Čarf's collection of beehive panels was restored for the occasion.

Exile of Slovenes 1941–1954 was an exhibition on exile, war atrocities, and the genocide carried out on Slovenes by the Nazis. Subsequently, on te 60th anniversary of the end of World War II, an exhibition on the hidden mass graves and killings after WWII in Slovenia was made with the topic Prikrito in očem zakrito, a polemic that is still strong in Slovene politics and history debates today.