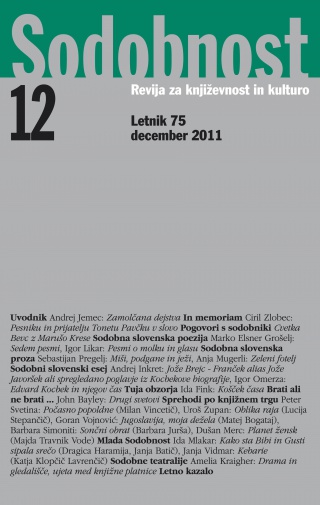 Sodobnost was founded in 1933, following the collapse of an earlier magazine, Ljubljanski zvon, and is the oldest Slovene magazine dedicated to literature and culture. It has since been published regularly, though during World War II it was off the shelves for 3 years. Since 2004, it has been published by the Sodobnost International Cultural Society. Sodobnost also confers the Best Short Story Award, jointly with the Slovene Writers’ Association, and the Best Slovene Essay Award.

Sodobnost has always been regarded as one of the most important Slovene literary magazines. It offers contributions from both renowned and budding Slovene authors, interviews, translations, book reviews and discussions. Numerous issues from the fields of literature, theatre and culture are put to the forefront by the magazine's many expert writers.

The magazine is available in bookstores or through yearly subscriptions in Slovenia and abroad. The archive of previous issues is featured on their website. Magazine subscribers are offered a discount of up to 50 per cent on Sodobnost Book Club purchases.

Sodobnost is one of the few Slovene publications that is a partner journal participating in the Vienna-based project Eurozine, a network of European cultural journals, linking over 80 partner journals and as many associated magazines and institutions from nearly all European countries. Eurozine is also an online magazine which posts highlights and tables of content from each issue of its partner journals as well as selected articles about culture and politics that have been translated into one of the major European languages.