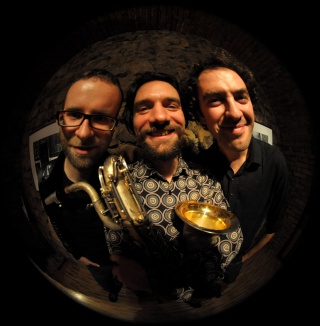 Performing their uplifting blend of Balkan bop, gypsy swing, and other shades of Slavic influenced jazz since 2009, Vasko Atanasovski Trio is composed of Vasko Atanasovski on saxophone, clarinet, and voice, Dejan Lapanja on guitar, and Marjan Stanić on drums. The band is closely tied to other projects by Atanasovski, an extraordinary musician whose creative output in the recent decade or so has made him one of the more prolific Slovene jazz musicians. All three artists have collaborated together before in Atanasovski's other ensembles; some of the compositions that they play as a trio come from those previous groups.

While the latest album was released in 2012, the trio has toured a lot in recent years, building its repertoire and profiling its sound. Notably, the group has made a name for themselves in China, where they first toured in 2009, earning many festival invitations and returning for another tour in 2011.

Vasko Atanasovski Trio on a rehearsal in November 2010.

Although playing and recording since the mid 1990s, Vasko Atanasovski first released a (solo) album under his name in 2001. A year later he released another one, this time leading a quartet. From then on he continued to release about one a year till 2009. The stylistic variety of his compositions spans from klezmer polkas to Renaissance music, almost always with an added touch of improvisation. Besides leading his own bands, he also plays in the Erich Fischer Quartet and with Bratko Bibič, and is featured on many albums by other artists. He writes music for orchestras and choirs and has done scores for puppet, dance, and theatre performances.

Of his more notable stage collaborations, playing with Marc Ribot, Greg Cohen, and Zlatko Kaučič in the Townhall, New York, must be mentioned. Other international formations in which he has played include Living Colour, Michel Godard, Hindi Zahra, Wilbert de Joode, Damir Imamović and Tamara Obrovac, to name just a few. He regularly appears on various stages of prominent European festivals like the Jazz & Wine Festival, Druga Godba Festival, Euro Jazz Festival, and clubs like Porgy & Bess (AT).

Of Marjan Stanić, much can be found elsewhere, as he is one of the most productive (and also one of the best) percussionists in Slovenia, playing in Žoambo Žoet Workestrao, Lolita, Uršula Ramoveš in Fantje z Jazbecove grape, Čompe, Alzheimer3, Bratko Bibič & The Madleys and a number of other bands and projects. The third member, Dejan Lapanja, has also worked with a number of artists and in the last decade appeared on records by Laibach, N'toko, Projekt mesto, Salamandra Salamandra, Klemen Teran in 19. November, Olivija, Bast, etc. In 2011, his debut album Ni časa za preroke [No time for prophets] was released.

Though they had occasionally appeared on the same stage before, all three musicians first started to collaborate in Vasko's band Mljask (Yum), mixing ethno rock, klezmer and Balkan polka with jazz improvisation and even chanson songs. The heritage of this project comprises a notable part of what the trio is currently doing.

A 2011 performance by Mljask in the RTV Slovenia show called NLP.

The ever lively drummer Marjan Stanić performing with Vasko Atanasovski Trio at the Festival of Slovenian Jazz, 2013 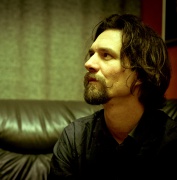 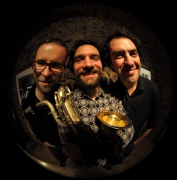 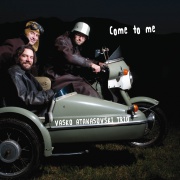