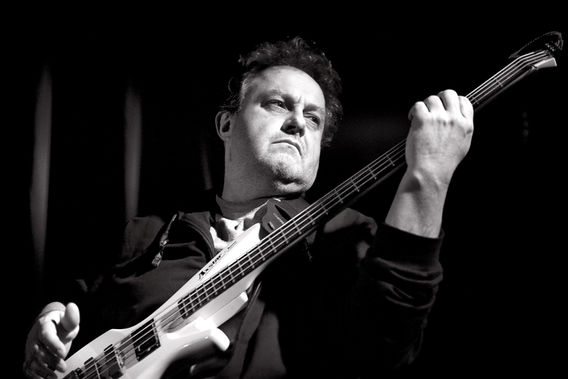 Established in 1987, Lolita is a veteran Ljubljana jazz band with a marked looseness concerning their line-up as well as their musical orientation. Throughout more than a dozen albums and numerous live shows and projects they have flexed their jazz foundation into many other fields, especially rock, ethno and free improvisation. They themselves say it's a "HiEnergy Turbo Porno Minimal SugarFree Pop Funky Overdrive Ethno Broootaal HardGroovie NuJawzz kind" of music. And even though change is the only musical direction they follow, they still have a distinctively trademark sound to themselves: a free floating, sometimes laid back, yet more often energetic, groove.

Their musical flexibility is very much defined by their ever-evolving line-up. As musicians have come (and gone) their own musical visions and preferences have kept the band's sound fresh even after more than a quarter of a century.

In 1987, the band was founded by Blaž Grm (drums), Primož Simončič (saxophone), and Iztok Vidmar (electric bass). The latter two have remained the band's core since then. A year later, the band was re-enforced by guitar player Samo Ljubešič. In 1991, Samo and Blaž left the band and the new drummer became Mirsad Šabić. Another new drummer was again introduced in 1997; Marjan Stanić, today one of the most sought after drummers in Slovenia, remained in the band till 2010 and left a decisive mark in the band's sound. Other musicians, involved for shorter periods, have been Jelena Ždrale and Matjaž Sekne (violin), Igor Bezget (guitar), and vocalists Mojca Dimec, Alenka Vidrih, and Alenka Marsenič.

The band has also played with some notable foreign musicians; trumpeters Axel Doerner and Ventzislav Blagoev, saxophonist Jessica Lurie, and pianist Antoni Donchev. The latter three were part of a side project called Lolita Libre, which also featured Matjaž Manček on guitar and Tomaž Grom on double bass.

The current permutation's drummer is Uroš Srpčič. The fourth member is Neža Trobec on vocals, joined by Matjaž Sekne on violin and Lado Jakša on keyboard, sax and clarinet. As the band's musical collaborations are hard to follow, the list is probably still incomplete.

Lolita began collaborating with performing arts projects in 1991, when they made music for a production by Ana Monró Theatre called George Dandin. That year they also performed (with music and movement) in a dance performance I wish you all the luck [Vso srečo ti želim]. First presented in Cankarjev dom, it was also featured in a dance theatre festival in Budapest (HU), and they afterwards collaborated in some other performance arts projects. In 1996 they first worked with Zijah A. Sokolović, a Bosnian actor, with whom they created a show called Bear[Medved] in 1997. Based on a play by Anton P. Chekhov, the show was awarded at the Bitola Monodrama Festival in 2003 and has since toured to festivals throughout Central and Eastern Europe. It has gotten awards at many of them, including festivals in Bitola, Kijev, Mostar, Erevan, Moscow, Kiel, Ruma, Nizhnevartovsk and Smederevo.

With the aforementioned project Lolita Libre the group played on various stages between 2002 and 2006; it was marked by a looser approach to musical structures and a much bigger emphasis on improvisation and experimentation. Even then, it was still very much "Lolitesque". A CD called Nero e Bianco was recorded in 2003 and can be freely downloaded from the web.

Lolita has played on a number of music festivals. They appeared multiple times on the stages of Jazz Cerkno Festival and the Ljubljana Jazz Festival, and also played at Pepsi Sziget Festival (Hungary), Kumanovo Jazz festival (Macedonia), Nishville Jazz festival and Jazz Festival Kragujevac (Serbia), Jazzeuropa Festival Tel-Aviv (Israel) and many others.

Their discography consists of more than a dozen albums, many of them recorded live. Most of them are freely available on the Internet (either complete CDs or selected songs). Their first album was released by the legendary FV Music label while the others were either self-published or were released by KUD France Prešeren. In 2014 they published an album at ZARŠ Records.

Other projects of Lolita band members

It is hard to list all the other bands and projects in which the band members are or have been involved. To name just a few, Vidmar was a member of the notable 1980s bands Čao Pičke and Borghesia; Uroš Srpčič played in Demolition Group; and Neža Naglič in Salamandra Salamandra. The band's former and still occasional member Marjan Stanić is or has been involved in Žoambo Žoet Workestrao, Bast, Alzheimer3, Jimmy Barka Experience, Bratko Bibič & The Madleys, Vasko Atanasovski Trio, the New York-based Jessica Lurie Ensemble, Uršula Ramoveš in Fantje z Jazbecove grape, etc.