Held each summer in a picturesque Alpine town, the Bled Festival first took of in 1996. It is a classical music festival of a broad horizon, regularly also inviting jazz, chanson or folk artists. Furthermore, concerts are but a part of its programme that also puts a very strong focus on young musicians. Not only does an international cast of mentors work with them via workshops and masterclasses, young and upcoming players also make up a sizeable part of the line-up.

The festival is managed by Bled Culture Institute and is led by its founder and artistic director, the acclaimed violinist Jernej Brence. 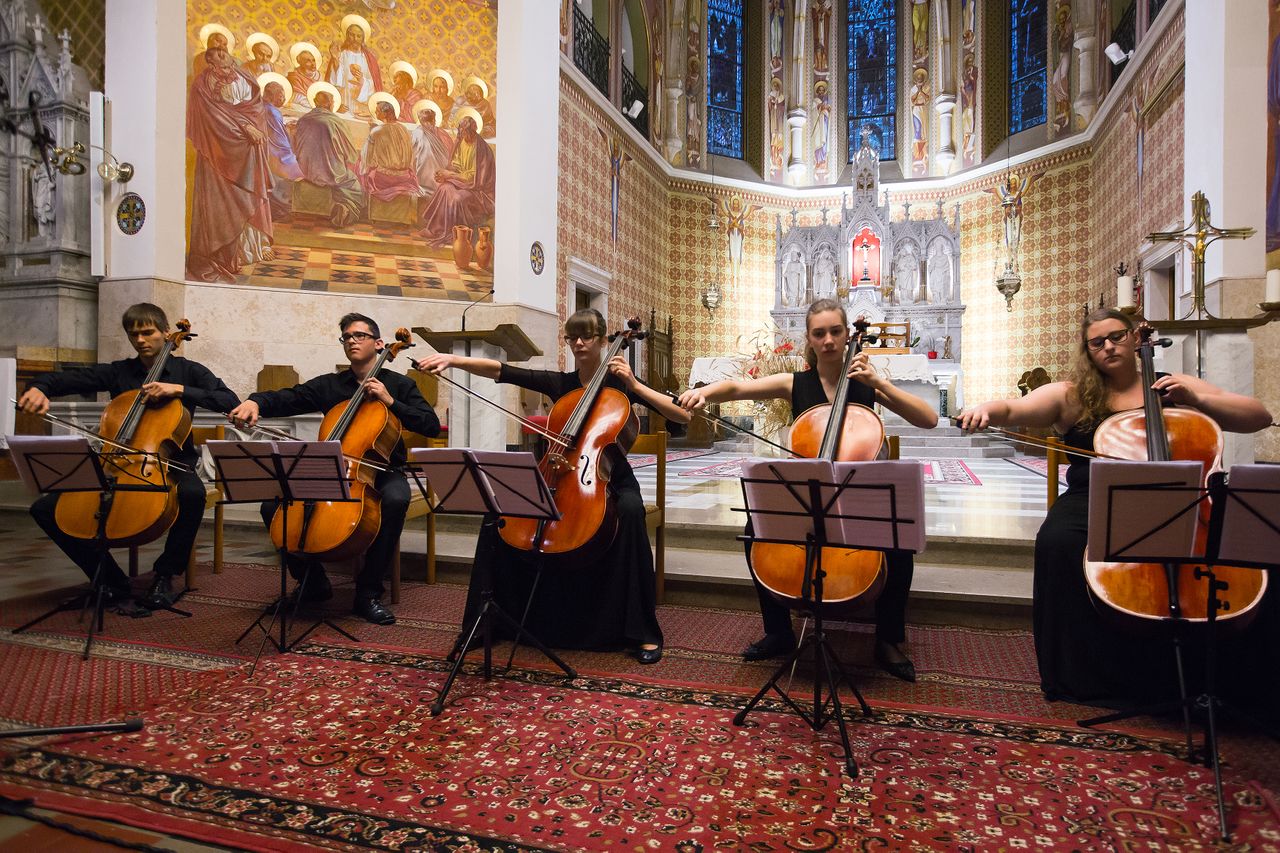 Cello Attacca! is a group of young cellists, joined and led by their professor Karmen Pečar Koritnik. They closed the 2016 edition of Bled Festival with a concert at St. Martin's Church, Bled.

Concerts take place at various venues in town of Bled, including the Bled Festival Hall, the Bled Castle, the church on Bled Island, Vila Bled and the Cafe Belvedere. Some places in outlying towns are sometimes also featured, like the magnificent baroque-styled hall of Radovljica Manor House.

There are a few (somewhat intertwined) festival sections, first among them the classical music concerts that show a certain affinity towards chamber music and string ensembles. However, the festival does tend to combine standard classical music repertoire with the more contemporary, 20th and 21st century composing streams. Some of the recent guests from abroad include the Chicago Master Singers (US), the Melbourne String Ensemble (AU), the Russian choir of the Voronezh State Philharmonic (RU) and numerous renowned individual musicians who usually also partake in the festival as mentors. 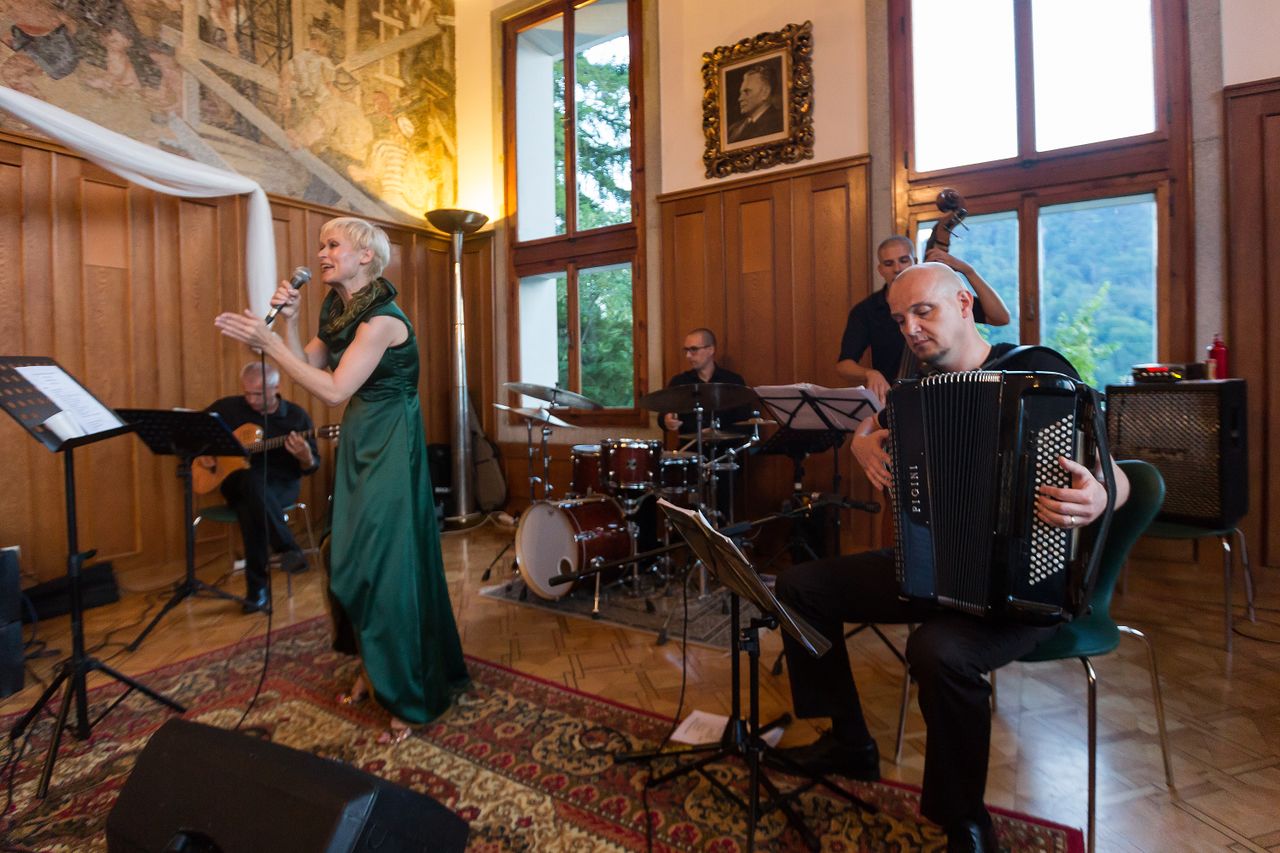 As for the representatives of other genres one may well mention Amedeo Tommasi (IT), Karen Asatrian & Armenian Spirit (AM), Marko Hatlak Band, Vesna Zornik's Tango Apasionada, and Big Band KK.

Concerts are accompanied by masterclasses and outreach workshops where master musicians share their knowledge. During the last two decades the masterclasses of Festival Bled have been attended by over 2,000 aspiring musicians, many of whom have by now gained international renown.

Some of the musicians leading the masterclasses (traditionally focusing on violin, viola, cello, chamber music, and singing) are Saewon Suh, Marianne Piketty, Robert Szreder, Piotr Jasiurkowski, Michael Frischenschlager and Karmen Pečar. All of them are or have been a part of the festival for several years, with such long-term relations an important feature of this festival. Some mentors are also invited to set up ensembles of young musicians upfront, giving them an evening concert slot of their own.

The jazz workshops mentors have been, among others, Jadranka Juras, Igor Matkovič, Jani Moder and Robert Jukič, all of them highly renowned Slovene musicians.

Each recent year the festival is accompanied by visual arts and photography exhibitions, set up at the Bled Festival Hall. Some of the selected painters in recent years are Rok Zelenko, Vinko Bogataj, Melita Vovk and Ejti Štih. In 2016 the Arts Society from Bled's twin town Velden am Wörthersee, Austria, presented a collection of paintings and installations by its members.

The festival also sets up various performances by dance groups, cabaret and stand-up shows, theatre productions and so on. A festival staple is also a violin-maker workshop, led by Edgar E. Russ from Cremona. 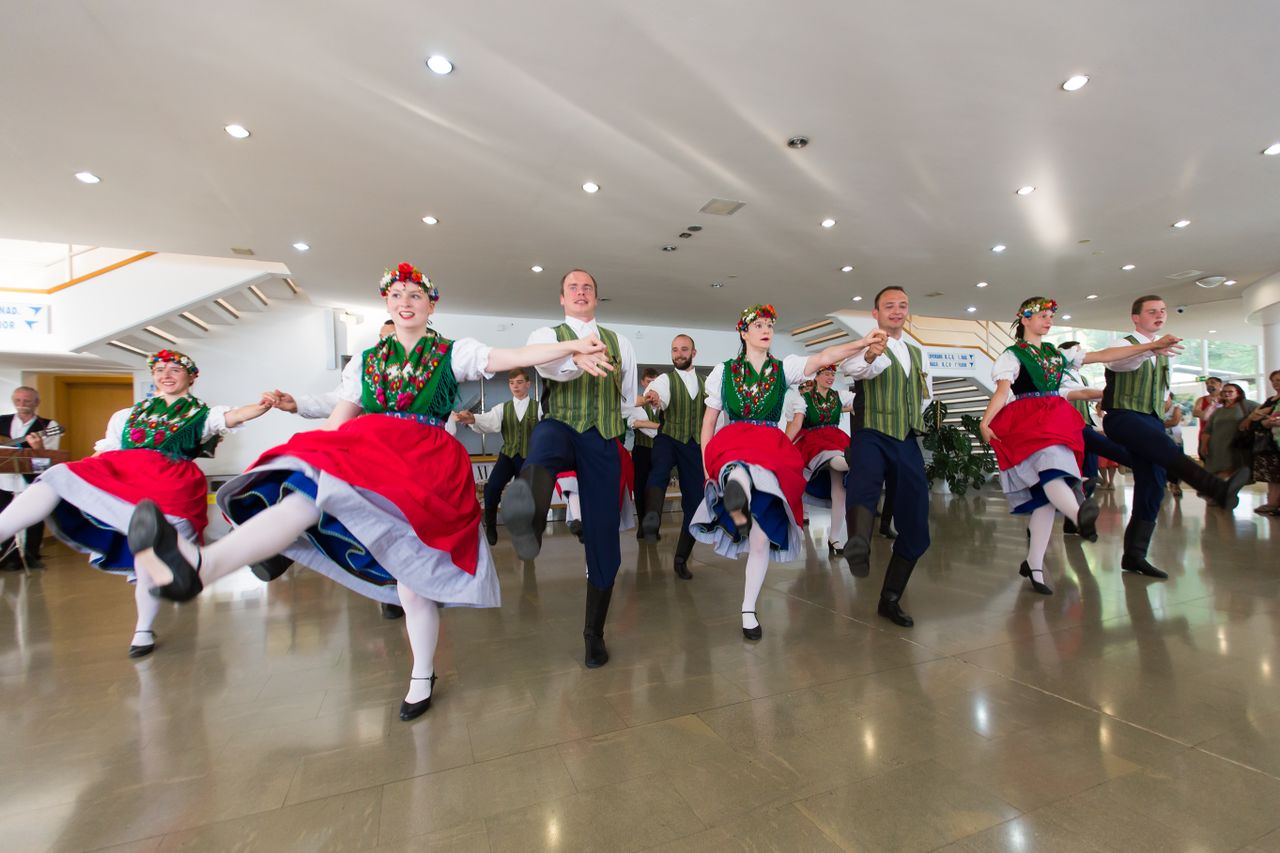 The dance collective Schmerlitz, a folklore dance group of Lusatian Serbs, performing at the Bled Festival, 2016

Up until 2013 a strong component of the festival was a programme of international viola, violin and chamber music competitions, a feature that may yet return to the festival.

The Bled Festival, along with its artistic director Jernej Brence, was awarded with several Slovene and international awards: the Medal of Honor of the town of Bled, The Lord Yehudi Menuhin Award, the Society of Slovene Composers Award, The Fellowship of Fritz Kreisler of Vienna Award and The Betetto Muniment. 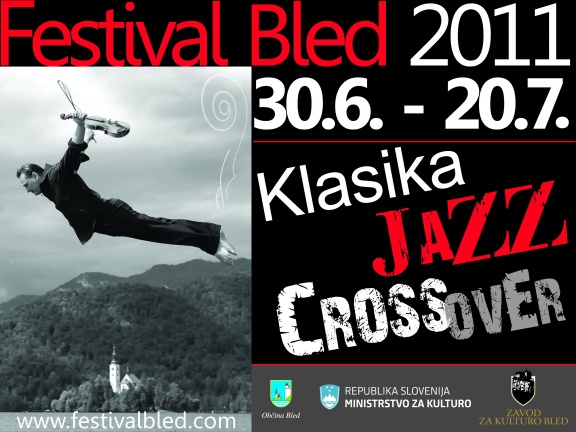 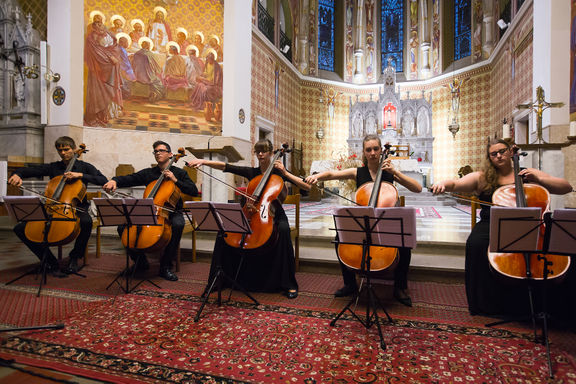 Cello Attacca! is a group of young cellists, joined and led by their professor Karmen Pečar Koritnik. They closed the 2016 edition of Bled Festival with a concert at St. Martin's Church, Bled. 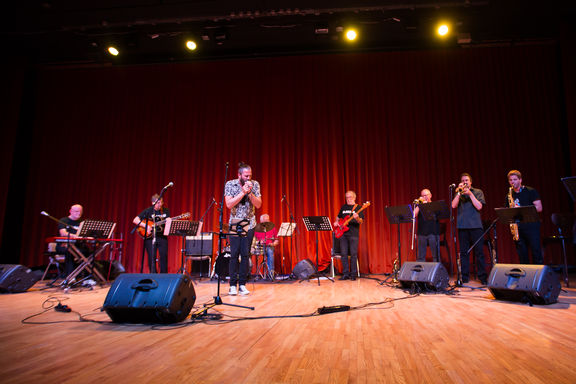 The opening concert for the Bled Festival 2016 belonged to Mladi levi, a legendary Slovene rock group founded in 1966 and recently joined by the vocalist Matevž Šalehar - Hamo. The gig took place at the Bled Festival Hall. 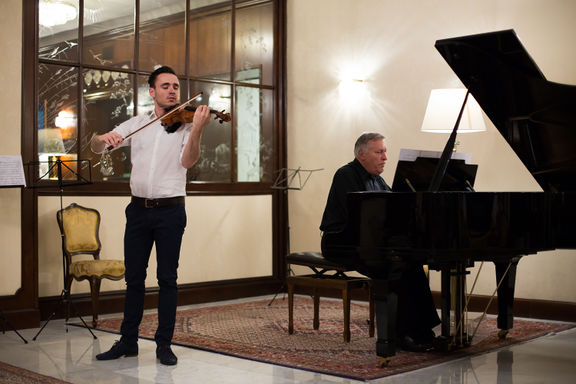 The 2016 Rising Starts programme featured the musicians Antoni Brozek and Pjotr Jasiurkovsky as mentors. Both are regulars at the Bled Festival, 2016 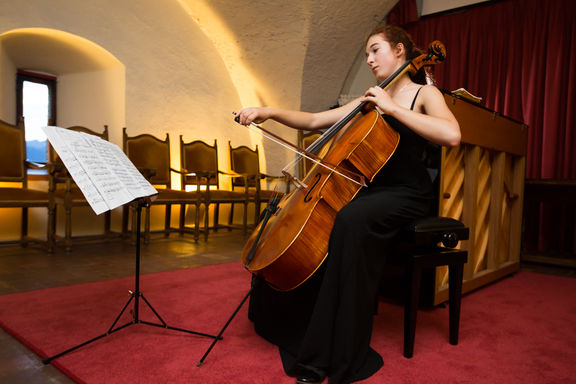 The young and highly talented cellist Zala Vidic, playing at the Knights' Hall of the Bled Castle, 2016 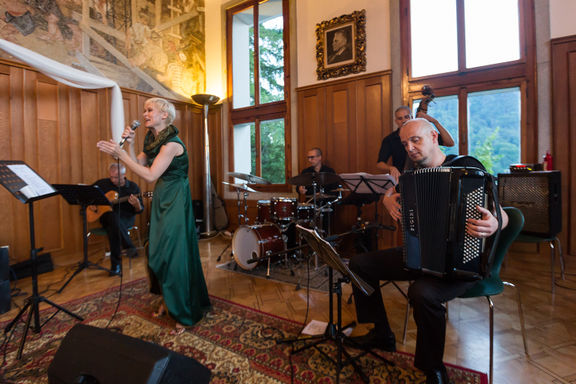 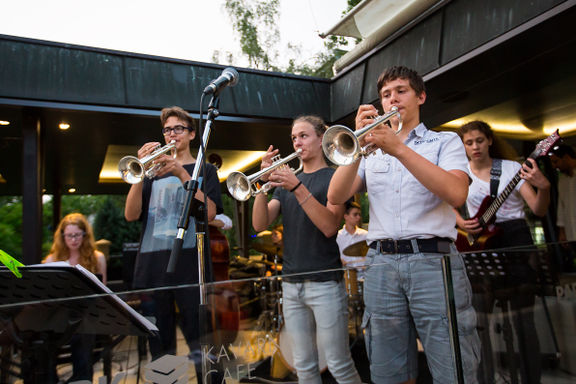 A concert of young jazz musicians at one of the cafes above the Bled lake, 2016 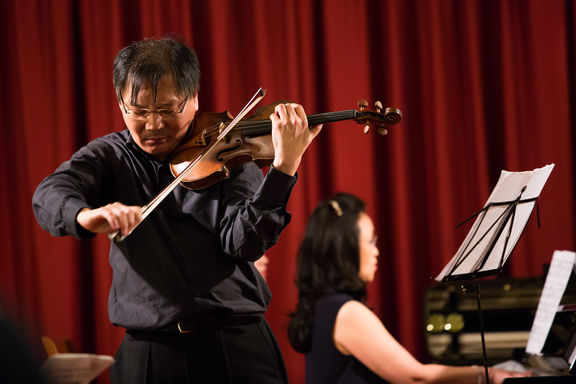 Professor Saewon Suh is not only regularly performing at the Bled Festival, he often also brings some outstanding (and mostly Korean) young musicians with him, 2016 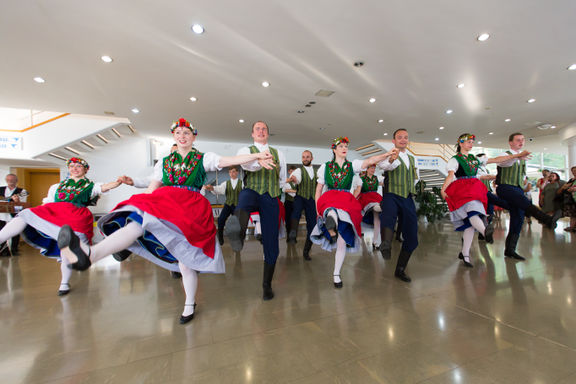