Kinoatelje, the centre for audio-visual and intercultural services was established in 1977 by Darko Bratina (1942–1997) in Gorizia-Gorica, a town situated on the Italian side of the Italo-Slovene border. Bratina was a sociologist and a film critic who considered film, television and video media as some of the best means of understanding society, history and culture.

Since its establishment, Kinoatelje's main goal has been to promote intercultural dialogue, a collaboration between Italy and Slovenia, and to introduce Slovene cinema to the Italian public. Its branch office Kinoatelje Institute was established in 2003 in Nova Gorica. 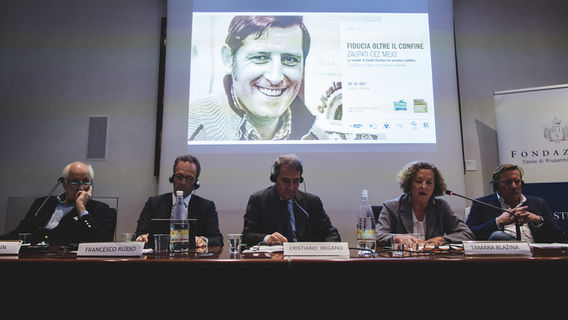 Kinoatelje's activities encompass film production, educational projects for the youth, workshops for professional educators, research projects, publishing of books, film festival organisation and other events connected to the cinema, as well as many other activities.

In 1981, Kinoatelje organised the first retrospective of Slovene cinema in Italy, which include productions between 1948 and 1981, called Cinema sloveno. It was followed by various avant-premières of Slovene films and other retrospectives. Since then, Kinoatelje has organised several events and projects, including Film Video Monitor, Gorica Kinema-Gorizia Cinema, Cinematography in Gorica 1896–1918, Film 100 Gorica, Mittelmonitor, Una città dimenticata (The Forgotten City), Remakes, A Chronicle of Love, and Film and Culture in Gorizia from the Avant-garde up to Nowadays. A special research project was dedicated to stage and film actress Nora Gregor (1901–1949), a native of Gorizia. 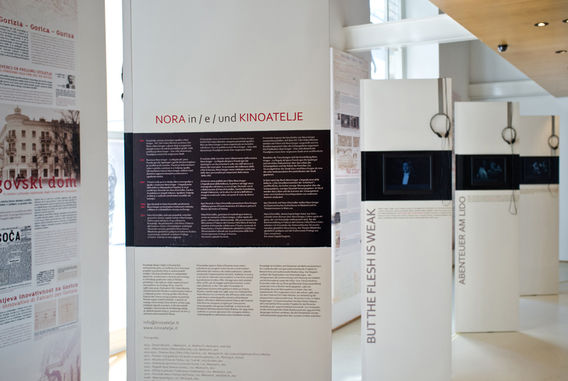 Since 2003, Kinoatelje and its Slovene branch the Kinoatelje Institute have co-produced several multimedia projects and documentaries. Jointly with the author tandem Nadja Velušček and Anja Medved, the organisations conceived and directed many documentaries exploring the complexity of border identities through personal and collective memory. The first among them was My Borderline (Moja meja). The Kinoatelje film collection also features A Small Apocalypse (Mala Apokalipsa, 2008); Alvaro Petricig's experimental film about abandoned villages in a remote Italian corner along the border; Beyond the Wire (Onstran žice, 2012), a documentary feature film about the Gonars concentration camp directed by Dorino Minigutti; and A Calm day (Miren dan, 2018) the feature debut by Jan Mozetič.

Tribute to a Vision festival

Since 1999, Kinoatelje organises the annual cross-border film festival Tribute to a Vision, taking place in the inter-regional space between Slovenia and Italy, thus connecting audiences and film institutions in 7 different cities (Gorizia, Nova Gorica, Trieste, Izola, San Pietro al Natisone, Udine and Ljubljana). The physical distances might not be great, but the colourful cultural variety imparts a unique enrichment in our shared cross-border space. 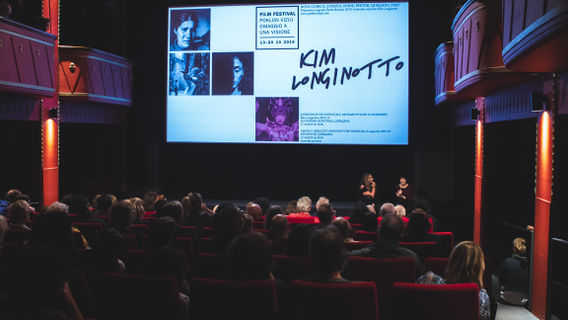 The centrepiece of the festival is the Darko Bratina Award along with a complete presentation of the winning author's filmography. Previous recipients of the award include Kim Longinotto, Peter Mettler, Dalibor Matanić, Ruth Beckermann, Karpo Godina, Želimir Žilnik, Miroslav Janek, and many others.

The film platform First Crossings, developed as an inherent part of the festival, is dedicated to the research of new film languages with a special focus on young audiences.

In the previous decade, Kinoatelje focused on developing cross-border educational film programmes and projects which promote creative and critical thinking among the young, teachers and mentors. Some of the past projects include The Refugee's Suitcase, From Diary to Blog, the Nova Gorica Youth Film Campus, etc.

One of the latest research projects put forward by Kinoatelje was dedicated to stage and film actress Nora Gregor (1901–1949), a native of Gorizia.

Kinoatelje aims to promote scientific and professional contents and to educate schoolteachers as well. Thus, it puts forwards various professional lectures and seminars.

Since 1999, Kinoatelje organizes the annual cross-border film festival Tribute to a Vision taking place in the inter-regional space between Slovenia and Italy, thus connecting audiences and film institutions in 7 different cities.

Since 2013 the Kinoatelje Institute, in collaboration with the Municipality of Nova Gorica, organizes the city’s open-air cinema, that presents Slovene and other awarded films.

The First Crossings film platform developed in 2018 within the cross-border Tribute to a Vision film festival. The platform focuses on short films by promising and innovative authors who dare to be free and experimental in their search of new film languages.

One of the main institute’s activities is film production. Through the years the Kinoatelje Institute has produced several documentaries, youth film production and other video forms.
Retrieved from "https://www.culture.si/w/index.php?title=Kinoatelje&oldid=277959"
Categories:
Hidden categories: