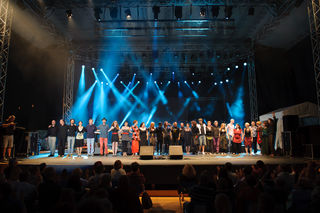 Celinka is a sort of a musical cooperative that functions as a platform for various artistic, commercial, and organisational endeavours by a diverse set of artists. Set up and still led – as a moving force and an artistic director – by the accordionist Janez Dovč, it was established in 2006.

Celinka's fields of activity encompass music publishing (sometimes led under the name Celinka Records), promoting musicians, setting up musical projects (Sounds of Slovenia), staging musical happenings (Godibodi Festival), leading a music studio, producing music for ads, and organising events for quite a diverse set of clients. Some of its activities are since 2014 done under the vehicle of Godibodi Institute.

Celinka has released about 70 albums ranging from jazz and ethno to chanson and pop, with many (if not most) of them hanging somewhere in between these coordinates. A quality and also accessible sound is their prime publishing policy in an otherwise very eclectic musical range that is actually rather successful and also critically acclaimed.

Sounds of Slovenia is a multimedia project with a focus on Slovene traditional folklore and music. Its core component is a group consisting of a little more than 30 musicians. All of them are established artists and most of them already have a history of their own adaptations of traditional musical material, with which this collective is also dealing in its own contemporary way. The musicians are accompanied by a VJ and a crew of technicians and together they produce quite a unique audiovisual performance.

Alongside this ambitious set up, there is also the much smaller Sounds of Slovenia Acoustic Trio, which consists of Janez Dovč on accordion, Boštjan Gombač on wind instruments, and Goran Krmac on tuba.

In the end of 2013, Sounds of Slovenia (the big band version) published an album called CEL ČES'N [The whole garlic], which is available only through Internet download. From there, one can get it by using a code that is sold in a package with a bunch of garlic cloves that were grown by the participating artists. The overarching concept of this project is the call for a better sustainable and home-grown food supply in Slovenia.

Sounds of Slovenia - "ČD" MAKING OF by soundsofslovenia on YouTube

The Sounds of Slovenia project also encompasses publishing albums of adapted traditional and sometimes truly vernacular Slovene music. Till now, 8 albums have been released and most of them also feature booklets that further elaborate the ethnomusicological work and theory involved. Also in this vein, in 2007 there was an exhibition in the Slovene Ethnographic Museum titled Sounds of Slovenia: from folk musicians to the Avseniks.

Almost since its inception, Celinka has been – usually under the brand Sounds of Slovenia – promoting Slovene culture abroad through various events, performances, and promotional videos. Besides this, they are "specialised in the production of custom events that combine show, music, videos, and performances, based on Slovene sounds, tradition, music, language, landscape, people" and can boast a rather long list of both corporate as well as public sector clients.