Herman Potočnik Noordung (1892–1929) was a rocket engineer and a space flight pioneer and a visionary who conceived the idea of a geostationary satellite.

The initiative of Dragan Živadinov (Noordung Cosmokinetic Cabinet) to put up a memorial centre that would showcase Potočnik's life and work was given a green light in the Municipality of Vitanje, a small town (today circa 880 inhabitants).

In December 2006, in advance of the 115th anniversary celebrations of Potočnik's birth the Herman Potočnik Noordung Memorial Centre was opened at Grajski trg 1, in the house where Herman's grandfather worked. In 2012, a Cultural Centre of European Space Technologies (KSEVT) was opened in Vitanje. The KSEVT team represented Slovenia at the 2014 Architecture Biennale in Venice with The Problem of Space Travel – Supre:architecture project, which delved into the fundamentals of architecture through the opus of the pioneer of space architecture.

A visionary with an extraordinary technological imagination and an astounding philosophy of existence, Herman Potočnik Noordung was the author of the first strategic plan for the human exploration of space, whose predictions enjoy growing confirmation with each new extra-terrestrial accomplishment in the modern era.

Born in 1892 to Slovene parents in Pula, Croatia, he spent World War I as a first lieutenant, assisting in the construction of railway lines and bridges on the Soča and Piava rivers. In 1925 he completed his engineering and electro-technical studies in Vienna with the title Specialist in Rocket Technology.

Years of dire economic hardship and illness coincided with his design of a futuristic rocket and his exploration of space-travel technology. Despite setbacks the first notes for a book emerged, inspired by the writings of German rocket scientist Hermann Oberth. By 1928 Noordung had completed a rough draft of all the chapters, and in 1929, shortly before his death, the book Das Problem der Befahrung des Weltraums was published. Running 188 pages and featuring 100 of his own drawings, it discusses gravity and ways of overcoming it, looks at space technology used in everyday life, contemplates the efficiency of the rocket while warning against its possible misuse for military purposes, and envisions a geostationary satellite that would orbit the globe indefinitely with enviable precision.

The concluding thought of the fourth and last segment of Potočnik's book is about the drive for nuclear and photonic technology which would make it possible to travel to nearby planets in our universe. The book considers space travel not as mere day-dreaming but as a very real technological possibility.

The Herman Potočnik Noordung Memorial Centre was a one-artefact-museum – Herman Potočnik Noordung's book The Problem of Space Travel (1929). The memorial room slightly resembled the interior of a space observatory. Due to lack of physical memorabilia about his life, the interior of an observatory capsule presented videos with statements of renowned historians, cosmonauts and astronauts for instance: Tatjana Nikolajevna Zhelnina, Pavel Klushantsev, Jurij Baturin, Roger Launius, Frederick I. Ordway III, and sir Arthur C. Clarke. Clarke introduced Potočnik's design of the wheel space station to Stanley Kubrick who used it (uncredited) in the film 2001: A Space Odyssey (1969). 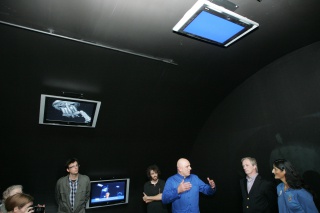 The programme of the Herman Potočnik Noordung Memorial Centre Vitanje was closely linked to the artistic endeavours of the Noordung Cosmokinetic Cabinet and developed by Dragan Živadinov (Merger of Art and Science), Dunja Zupančič (Postgravity Art) and Miha Turšič (Culturalisation of Space).

The memorial centre occasionally hosted astronauts (for example, Christer Fuglesang, Sunita Williams) and other prominent guests. In May and June 2009 the Herman Potočnik Noordung Memorial Centre Vitanje hosted an exhibition of Russian scientist and cosmonaut Jurij Baturin with the title Meeting with Earth. 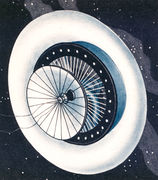 Hermann Noordung image depicts a three-unit space station as seen from a space ship. The three units were the habitat, the machine room, and the observatory, each connected by an umbilical, 1929

Herman Potočnik Noordung (1892–1929) was an engineer in the Austrian army who wrote an early work on spaceflight and created the first detailed technical drawings of a space station.

The exhibition Sky is black, Earth is blue, dedicated to Yuri Gagarin, prepared by the Cultural Centre of European Space Technologies (KSEVT) team at the opening Russian Scientific and Cultural Centre, Ljubljana, 2011

The exhibition Sky is black, Earth is blue, dedicated to the 50th anniversary of Yuri Gagarin's first flight into space, prepared by the Cultural Centre of European Space Technologies (KSEVT) team. The opening of the Russian Scientific and Cultural Centre, Ljubljana, 2011 (From left to right: Miha Turšič, Dragan Živadinov)
Retrieved from "https://www.culture.si/w/index.php?title=Herman_Potočnik_Noordung_and_Vitanje&oldid=157138"
Hidden categories: