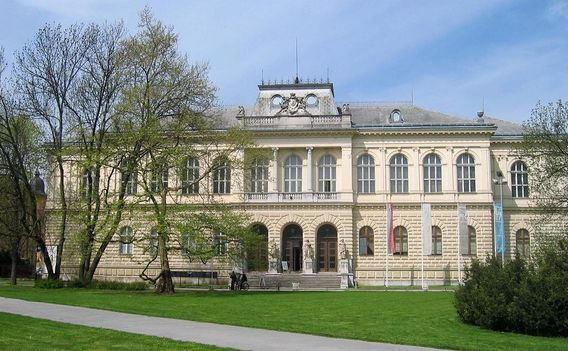 Established in 1821, the National Museum of Slovenia is the country's oldest cultural and scientific institution. It holds major historical artefacts and sets museum guidelines and education standards for Slovene museums and the public. Museum experts and associates publish relevant literature on objects and documents that represent Slovene history and culture. The National Museum of Slovenia comprises an Archaeological Department, a Numismatic Cabinet, a Department of Prints and Drawings, a Department of History and Applied Arts, Conservation and Restoration Department and a library. In 2008 the museum opened additional premises at the Metelkova street.

Highlights of the museum are the Neanderthal flute from the Stone Age cave of Divje babe, probably the oldest instrument in the world (45000 BC), the famous ancient dugout wooden canoe and selected artefacts from Copper and Bronze Age pile-dwelling settlements of the Ljubljana marshes (3rd millennium BC), Ishata Egyptian Mummy, a bronze situla from Vače (500 BC), a monumental gilded Roman statue of a citizen from Emona, rich archaeological finds from the Ljubljanica River, early medieval jewellery and arms, etc., which are presented in the Main Museum Building.

The National Museum of Slovenia originates from the Provincial Museum of Carniola, which was established in 1821. The current building was built between 1881 and 1885 and was designed in a Neo-Renaissance style by the Slovene architect Viljem Treo. The interior decorations were made by the painters Janez and Jurij Šubic. A monument to the Carniolan polyhistorian Janez Vajkard Valvasor, designed by the sculptor Alojz Gangl, was placed in front of the museum in 1904.

In 1991 the inner courtyard of the museum's main premises was covered for temporary exhibitions and public events. The opening of a lapidary collection in the new glass pavilion next to the museum took place in 2006.

In 2008 the new premises of the National Museum of Slovenia opened at the Metelkova Museum Quarter. They offer storerooms in the basement, professional and modern storage space for museum items of various materials and storage demands. The renovated building, which prior to 1991 was a military compound called 4th of July, has exhibition rooms to house study collections on the history of applied arts. The ground floor offers spaces for block buster exhibition events. The opening of the new building was inaugurated by the exhibition Primož Trubar 1508–1586 on the occasion of the 500th anniversary of the birth of the author of the first Slovene book, published in 1550.

The National Museum of Slovenia manages also the permanent exhibitions of the Bled Castle (since 1957) and the Snežnik Castle Museum (since 2008), the only castle in Slovenia with original interiors.

In 2017 the Open Depot exhibition of the three national museums opened in the Park of Military History Pivka.

The Archaeological Department is the oldest of the specialised museum departments in Slovenia. It acquires, stores, and studies material from all archaeological periods found throughout Slovenia. It also has a small collection of artefacts from Egypt, including a mummy. The earliest finds were acquired more than 170 years ago. The collection today consists of around 63,000 objects from all archaeological periods. The individual objects and groups of material include some whose importance extends beyond the region of Slovenia, nearly all those mentioned as highlights of museum.

The museum acquires material from field work – from topographic surveys and excavations (including recent finds from the Ljubljanica River, Godič near Kamnik, Gradišče above Bašelj, Dragomelj, Pržanj) – and also from donations and purchases. The computer programme Situla has been developed to aide in recording information about the artefacts. The research of the Archaeological Department is focused on problems related to the material stored in the National Museum of Slovenia, other Slovenian museums, and several museums in other European countries. The main themes of this research are the composition and technology of prehistoric metal objects, the local production of Roman pottery, Roman military equipment and fortifications, early medieval metal and glass objects, and weapons and military equipment in the late Middle Ages.

The department also organises thematic exhibitions using material from throughout the entire country. Recent major exhibitions were Pismo brez pisave/Carta sine litteris/A Letter without Writing (1991, the Valvasor Award), Neanderthal Man and His Flute (1997), From the Romans to the Slavs (2000, award from the Slovenian Archaeological Society), Ljubljanica – A River and its Past (2009).

The renovation of the museum building provided the opportunity to create a new archaeological and cultural history depository and a lapidary collection. Material displayed on the upper floor can be removed when major temporary exhibitions are installed.

Adjacent to the main museum building in the glass pavilion there is an exhibition of Roman stone monuments, many of which were discovered in Emona, Ljubljana's earliest incarnation. The collection includes mosaics, altars as well as a monumental stone sculpture of a lion. The number of tombstones, stone cemetery urns and sarcophagi illustrate the importance of funerary rites during the Roman period. About 80 Roman milestones from the 2nd to the 4th century AD have been discovered in Slovenia, and while many of them remain in their original location, a few are on display in the museum.

The Museum's Numismatic Department is the only one of its kind in Slovenia and thus also functions as a national reference institution. Its principal tasks, besides collecting, include the documentation, professional preservation and scientific study of coins, bank notes and other financial instruments; the setting up corpora of classical, medieval and modern age finds from the Slovene territory; and the study of the development of banking and insurance in Slovenia.

The Department of Prints and Drawings operates as part of the library and possesses over 30,000 items. Its holdings are divided into two basic groups – graphic and drawings – and, by contents, into art material and documentary material. The collections include works by domestic and foreign masters, different schools and stylistic trends, different graphic and drawing techniques and thematic units. The museum's collection of religious graphic art, devotional prints and documentary representations is particularly extensive and is of major importance in the reconstruction of national history.

Department of History and Applied Arts

In 2008 the Department of History and Applied Arts moved to the new premises of the National Museum of Slovenia - Metelkova.

The basic tasks of the Conservation and Restoration Department extend beyond conserving and restoring to include producing museum replicas and professionally packaging of museum exponents, doing research and publishing results in professional and popular scientific publications, as well as offering professional advice and education. The department offers mentorship for professional examinations and theses and workshops for conservators-restorers. It is also responsible for the preventive conservation of all of the museum collections. In accordance with professional requirements, the department specialises in work according to material and period. The archaeological part of the department conserves and restores archaeological metal, waterlogged wood, numismatic items, textile, glass, and pottery. The applied art section of the department conserves and restores historical weapons and military equipment, furniture, paintings, and crafted objects of metal, glass, pottery, and organic material. Workshops have modern equipment and procedures for examination of material and museum artefacts such as: electronic microscopes, X-ray and neutron radiography, computer tomography, XRF EDS, PIXE, IR, and UV photography, and other analytical methods.

With the digitisation of material and the construction of an electronic database about the cultural heritage that its preserves, the National Museum of Slovenia has joined similar European institutions that are attempting to enable the broadest possible access to items of the cultural heritage through the use of modern information technology. Fundus, Situla and Patina are computer software applications that have been developed in the National Museum of Slovenia for digital documentation, archiving of museum items, and insight into their state of preservation. These tools provide public access to collections in the museum through digital media. The database is constantly updated and it can be used for various multi-layered information on museum items. Some 85 % of all items have been entered into the database, the rest can be found documented in access books.

The National Museum of Slovenia has organised a series of exhibitions primarily focusing on the material from its own collections, although material from other museums in Slovenia has also been included. Temporary art, design and craft exhibitions are also organised. Among the most popular was the 2019 exhibition of the Coptic Textiles from the museum collection. In 2018 The Gold of the Chinese Emperors exhibition was prepared in collaboration with the Xi'an Qujiang Museum of Fine Arts.

Educational lectures, public panels and discussions are also organised regularly with foreign and domestic scientists. At least two big exhibitions are presented per year and they usually last for several months.

All of the museum's exhibitions have been accompanied by richly illustrated catalogues. To name some: Castles are Crumbling, and Factories Rising. The Industrial Design of the 19th Century in Slovenia, Gothic in Slovenia. The World of Objects (1995), The Theatre of Human Life and Death. Images from the Seventeenth Century in Slovenia (2002), From Bronze Ingots to the Euro. A Short Monetary History of Slovenia (2007), Treasures of the National Museum of Slovenia (2007), Primož Trubar 1508–1586. On the five-hundredth Anniversary of his Birth (2008), Neolithic Art in the Republic of Macedonia (2008), The Ljubljanica: A River and its Past (2009), etc.

Twice a year since 1962, the museum publishes Argo, the Journal of the Slovene Museums, the most important professional publication of Slovene museum experts, dealing with the art history and museology of the ancient and the medieval periods.

Established in 1957, Situla Journal: Dissertationes Musei Nationalis Sloveniae is an annual publication of the National Museum which brings syntheses from the field of archaeology as well as monographs about numismatics, epigraphy, and ancient history.

Launched in 1994, Viri Journal – subtitled Sources for Slovene Material Culture – is published every two years by the National Museum of Slovenia. It presents the results of research into the material culture of various historical periods in Slovenia. Past issues have focused on medals and medallions, pilgrims' badges, religious textiles, cream-coloured earthenware, and the collection of medieval glass, etc.

The Catalogi et Monographiae series comprises catalogues with summarised presentations of important archaeological sites, excavations and findings from different periods in the regions of Slovenia. The series has been published since 1955, but not every year. Thirty-nine numbers have been published, with recent numbers also translated into English.

In 2006 the Slovenian Third Age University and the National Museum of Slovenia began an educational programme to train cultural mediators, volunteers on the field of cultural heritage, to give guided tours to visitors about artefacts and the context of specific exhibitions. The cooperation was supported by the European Commission (Gruntvig project LACE). The first exhibition which benefited from these newly trained mediators was Slovenian Language: Identity and Symbol. A Short History of Slovenians (2007).

Public guided tours of the exhibitions are organised every third Sunday of the month at 11 am, an also educational programme for children is also organised on weekends, and even children's parties, called Arheo-parties, can be arranged. When not in use, some halls of the National Museum can be also hired for presentations, press conferences, receptions and concerts.

The National Museum of Slovenia and its experts also manage state exams for national heritage in which professionals apply for state licence in the fields of museology, exhibiting, conservation and restoring, regarding also state laws on the organisation and protection of national heritage.

View from the entrance of the Roman fortress Ad Pirum to its northern side where the transverse wall that divided the fortress into two parts is still visible. Hrušica - Museum Collection and Archaeological Park

View from the northern part of the Roman fortress Ad Pirum to its southern lower part. Hrušica - Museum Collection and Archaeological Park