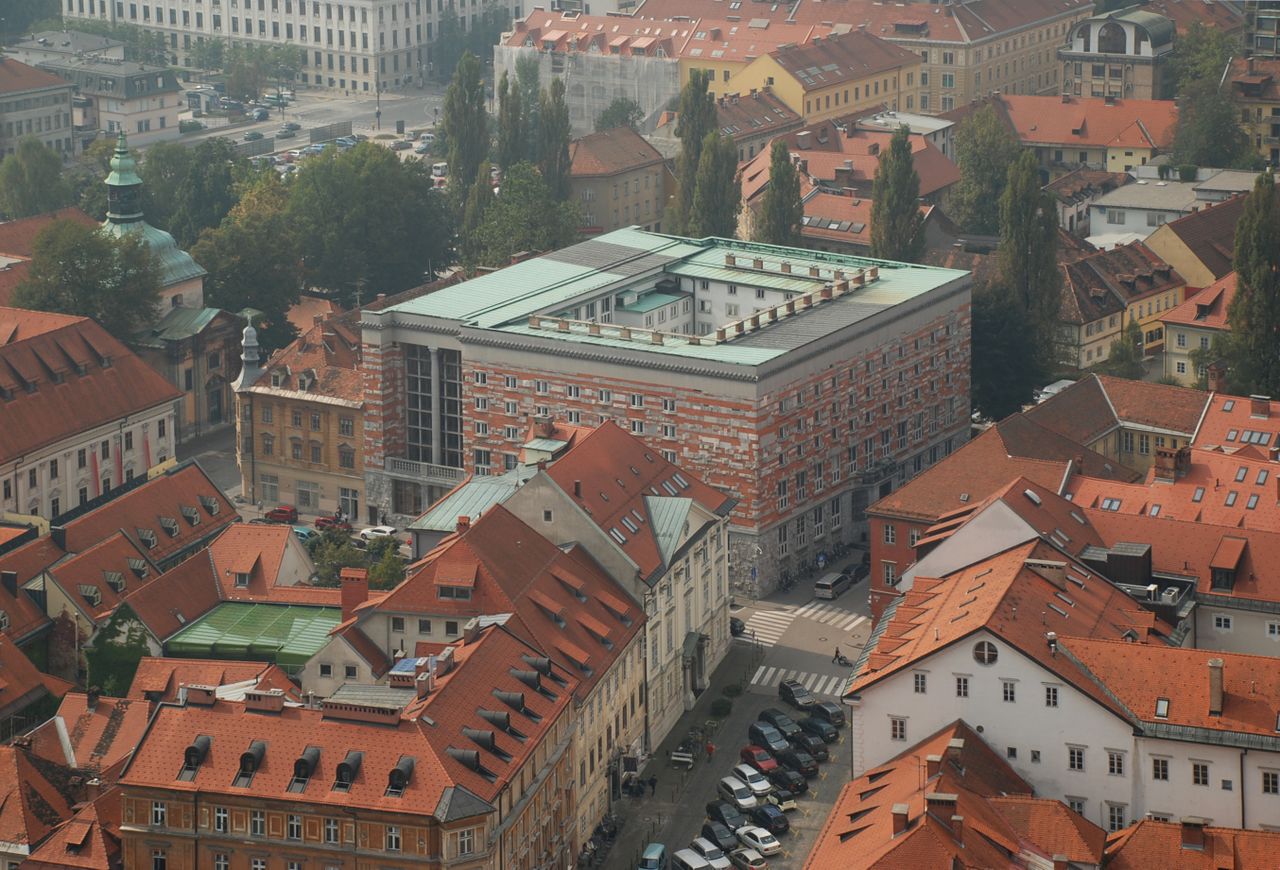 The National and University Library (NUK) serves as the national library of Slovenia, the main library of the University of Ljubljana for humanities and social sciences, the Slovenian legal deposit library and the trusted digital repository for Slovenian cultural and scientific heritage. NUK is the headquarters of the Slovenian bibliographic service and the national aggregator of e-content from the field of culture to Europeana.

NUK's collections and services support the scholarly and scientific work of the University of Ljubljana and other higher education institutions. The library is a centre of knowledge aimed at lifelong education of Slovenes, and at raising their cultural and educational level and information literacy skills. Through research, development and educational activities in the field of librarianship, the library actively co-shapes the Slovenian library system and makes significant contributions to the theoretical and practical knowledge of library and information science.

With roots in the 18th century, the institution is today housed in the exquisite cultural monument conceived by Slovenian architect Jože Plečnik and built 1938–1940. A four-storey, four-winged building in the shape of an irregular rectangle, with two small inner yards, boasts with an interior containing numerous excellent architectural details, made of marble, bronze or wood.

Main Entrance Staircase of the National and University Library by Jože Plečnik, 2009

The National and University Library (NUK) originated in 1774 with a decree of Empress Maria Theresa. Around 637 books which had escaped a fire in the previously-dissolved Jesuit college in Ljubljana were henceforth made available for public use in the newly-established library of Ljubljana Lyceum (High School). The Lyceum Library was legally entitled to receive copies of legal documents from the province of Carniola as early as 1807, and during the French occupation its legal deposit status was extended to all of the Illyrian provinces. After the abolition of the Lyceum in 1850 the library became the main reference library for Carniola.

Immediately after World War I, in 1919, the Lyceum Library was renamed the State Reference Library, thus becoming the central library of Slovenia with the right to receive mandatory deposit copies from that area. In 1921, it became the State Library and legal documents from all the regions of former Yugoslavia started to pour in. With the founding in that same year of the University of Ljubljana, the library also began to serve as the central university library. However, as it had to operate provisionally within the limited confines of an adapted area of the old Lyceum in Poljane Street; as a university city, Ljubljana could only offer 18 seats for readers in its university library.

After Slovenia gained independence in 1991, the National and University Library received additional tasks and responsibilities previously exercised by federal institutions of the former Yugoslavia. For example, it founded the National Agency for International Bibliographic Control of Publications. In 2003, the National and University Library became an associate member of the University of Ljubljana with contractually defined activities and services provided by the library for the needs of the educational, scientific research and artistic activities of the university and its library system.

The main building was built between 1936 and 1941. Formerly the site of the late Renaissance Auersperg Palace, which was largely destroyed by the 1895 earthquake. The library is the largest Jože Plečnik building in Ljubljana. He began working on the plans for the library (which would otherwise have been in Tivoli) as early as 1927. It was built as a ground plan irregular rectangle with four four-storey tracts. The outer facade is made of brick, complemented by uneven and differently worked stone squares and convex windows. There is a large reading room (236 seats), which is open through four floors in height and illuminated through walls on the east and west sides. At the top of the main staircase, there is a statue of Primož Trubar, the pioneer of the written Slovene word.

The main tasks of NUK are collecting and preserving the national collection (Slovenika), enabling access to its collection, co-creating the supra-national virtual world library (E-library), providing expert support to the national library system and developing its functions as a central library of the University of Ljubljana.

In addition to NUK's 9 departments, Slovenia's ISBN-, ISMN- and ISSN-issuing agencies are also located here, along with the National Centre for Library Development, the National Book Preservation and Restoration Centre, the National Bibliographic Agency, the Educational and Training Centre and the Research and Development Department. Library activities all over the country are organised within the framework of the National Centre for the Development of Libraries. It assesses and directs activities through statistical information acquired from libraries, and prepares drafts and proposals of library standards, laws, acts, and regulations, mainly for the use of the Ministry of Culture.

Automatisation has taken place since 1988. NUK offers a computer room with 19 computers, a lecture room and an Info Centre with 18 computers. Print on demand is a service that enables you to order printing of a book (published between 1500 and 1945) from NUK's collections in standard soft binding.

Since 2006, NUK has been developing the DLib.si - Digital Library of Slovenia, a web portal providing ready access to digital items such as journals, books, manuscripts, maps, photographs, music and reference material. All the collections are freely accessible. Recent additions include the digitalised former Ljubljana municipality's newsletters (from the early sixties to Slovenia's independence), Zbor občanov (The Citizens' Meeting) and the journal Ženski svet (Women's World), published between the two world wars first in Trieste and then in Ljubljana, which fought against poverty, de-nationalisation and assimilation.

NUK organises a range of documentary exhibitions every year, based on its archives and collections. The exhibitions celebrate various anniversaries of the renowned historical or contemporary personalities (Svet… Svet… Svetlana on the 70th anniversary of the birth of poet Svetlana Makarovič) or highlight a specific topic (for example, on relations between the Czechs and Slovenes or the Ideology of Nation in the Graphic Design of Personal Documents). The library also hosts some touring exhibitions (for example, Hans Christian Andersen, Odense). Kosovel's Typography and Design of Books by Boris Balant was the first of a series of exhibitions in the Exhibition Room of the National and University Library – the exhibition is solely dedicated to the beauty of the book. Its leading idea is that the beauty of a book is equally important as its content.

NUK also collaborates with other organisers and lends the material for displays (for example, May '68 in Paris and the Student Movement in Ljubljana, 1968–1972 in the International Centre of Graphic Arts).

NUK also offers in-service training programmes in librarianship for those members of the staff who have graduated from other faculties and have worked in a library for at least a year.

NUK is experienced in international cooperation activity, attending and contributing to international conferences, participating in various international boards and collaborating in various international projects. It conducts interlibrary lending with partners such as BL DSC (ARTEmail), DBI-Link, Subito, OCLC (Prism), CNRS (INIST) and Proquest (PhD, MA theses) and exchanges with the EU, UNESCO and the UN. Cooperation has been particularly active with Czech and Danish national libraries. NUK librarians have held internships at the University of Wisconsin, USA; the City University of London; and the University of Illinois, USA; while librarians from Russia, Albania, Croatia, Bosnia and Herzegovina, Serbia and Montenegro have conducted internships at NUK.

NUK is a coordinator of COSEC (Slovenian Consortium for licensed e-resources) and, since 2003, a member of EIFL.

NUK is involved in EU projects such as TEL, PAPYLUM, EURECA and LEAF, and in some Central and Eastern European projects concerned with cataloguing, performance evaluation and the preparation of a multilingual dictionary of library terms (5,500 entries in 16 European languages). In 2001, NUK organised the first TEL European Library Seminar and the IFLA Seminar on Interlibrary Loans and Document Supply, which involved 150 experts from 33 countries. NUK is a member of IFLA, LIBER, FID, ALA, ELAG, ASIS, IAML, ISSN, ISBN, ISN, OCLC, the Conference of European National Librarians (CENL) and the European Commission on Preservation and Access (ECPA). Co-operation with the British Library and the Library Association in the United Kingdom is currently being developed.

Most of NUK's efforts are related to the process of digitalisation. NUK is the national representative in the Europeana (European digital library network) project, and has engaged in partnerships such as the eBooks on Demand (EOD): a European digitization service, funded through the Digitization on Demand project funded by the European Union (2006–2008) and the EU Culture programme (2009–2013).

The National and University Library is a national aggregator of e-content from the field of culture. Thus, the AV materials from the DLib.si - Digital Library of Slovenia, the regional libraries, the Culture.si photo collection or SIGIC, Slovene Music Information Centre are accessible also at the Europeana.eu portal. 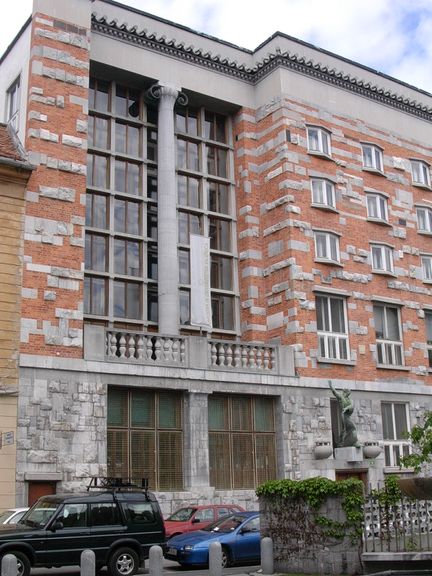 Facade of the National and University Library by Jože Plečnik, 2005 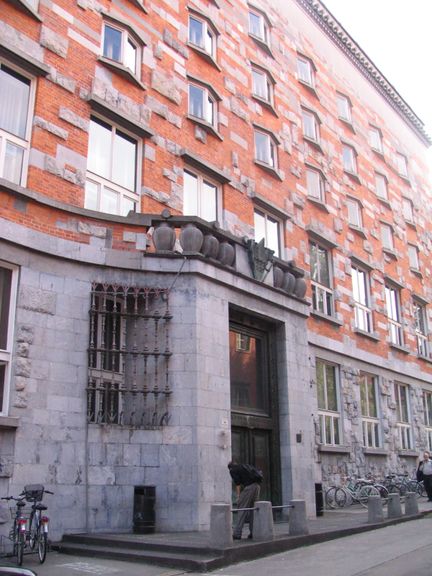 Façade of the National and University Library by Jože Plečnik, 2008

Main Entrance Staircase of the National and University Library by Jože Plečnik, 2009 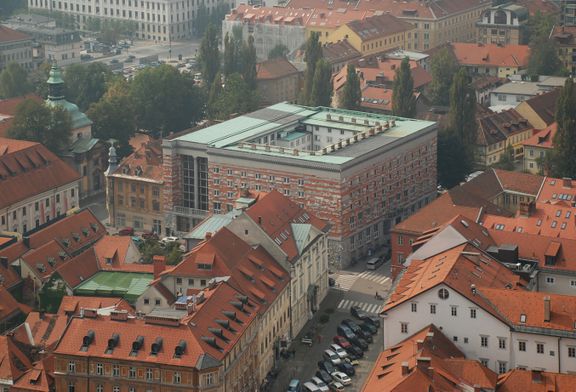 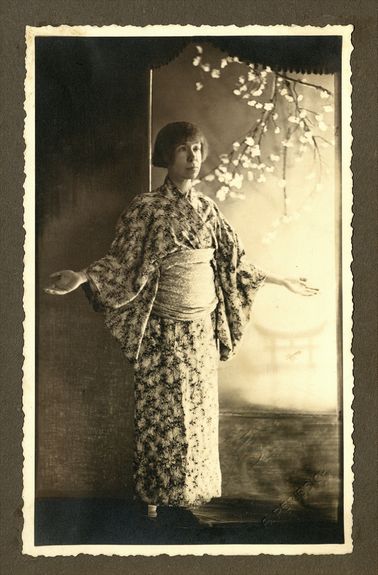 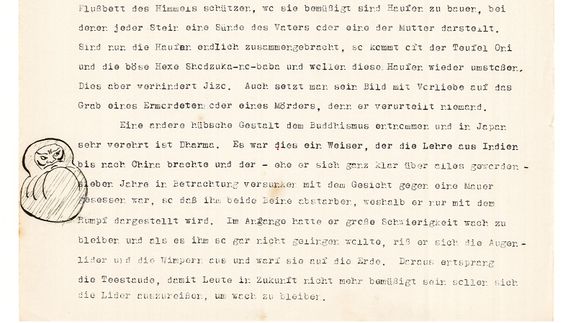