You can browse the search results for Updated 2021 below

Botegin Centre
Botegin Centre, the MKSMC Botegin, Youth, Cultural, Social, Multimedia and Intergenerational Centre Botegin, is a social place, located in the old city centre of Koper.
.0991
Ravne Gallery
Ravne Gallery has been operating since 2012 as part of the Museum of Modern and Contemporary Art Koroška, focusing on the collections and studies of art from the second half of the 20th century onwards, located in Slovenj Gradec in Koroška region.
.0991
Drama Festival
Launched in 2014 by the Slovene National Theatre Drama Ljubljana, the Drama Festival showcases performances of outstanding poetics by some of the best European and Slovenian directors working in the European arena, thereby helping to spread the context of what is local or national in a specific theatre culture.
.0991
Research and Documentation Center JAS
The Research and Documentation Center JAS was established in 2010 as a continuation of the ongoing projects basically aimed at creating an electronic database of Jewish Archive of Slovenia.
.0991
Alma M. Karlin Virtual Home
This virtual residence is dedicated to Alma Karlin (1889–1950), an extraordinary traveller, polyglot, theosophist, and writer from Celje.
.0991
KUD Ljud
KUD Ljud is an independent production organisation established in 2006 as an arts and culture association (Kulturno umetniško društvo (KUD), however its members had worked together within various institutions before.
.0991
Federacija Institute
Treating contemporary dance and theatre performances as a starting point – yet not an end in itself – the Federacija Institute is a quite peculiar production house.
.0991
Kolektiv Narobov
Founded in 2004 by Alenka Marinič, Dražen Dragojević, Gregor Moder, Maja Dekleva Lapajne, Sonja Vilč, and Tomaž Lapajne, Kolektiv Narobov is a Ljubljana-based professional performing arts collective and one of Slovenia's leading improvisation theatre groups that has developed a very unique approach to improvisation, comedy and storytelling, combining influences of physical theatre, contemporary dance, and clowning.
.0991
Miss Bazilika Narrative Theatre
Miss Bazilika Narrative Theatre was established in 2005 by artist Katja Povše, a.k.a.
.0991
Milko Kos Historical Institute 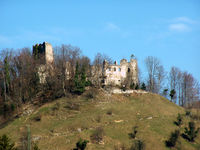 Originally established in 1947 as a Section for General and National History within the Institute for History led by Milko Kos (1892–1972), the Milko Kos Historical Institute became an independent institute in 1972.
.0991
Linhart Encounter
Named after the celebrated Slovene dramatist and historian Anton Tomaž Linhart (1756–1795), Linhart Encounter is an annual festival of non-professional Slovene theatre groups, organised by the Public Fund for Cultural Activities of the Republic of Slovenia since 1962.
.0991
Labirint Theatre
Labirint Theatre was established in 1992 by Saša Jovanović, who studied puppetry at the International Puppet Institute and Puppet Arts School, Charleville Mezieres, France.
.0991
Load more

This category contains only the following file.