The entrance of the Kranj City Library, 2013

The baroque trompe-l'œil fresque above staircase in the Brežice Castle

The church on Bled Island was built in its current form near the end of the 17th century. While it served as a pilgrim's destination for several centuries, nowadays it mostly serves as a very popular tourist spot.

The Žužemberk Castle, nestled in the heart of the town of Žužemberk.

The so-called Old Counts' Mansion, one of the mansions that host the Celje Regional Museum. 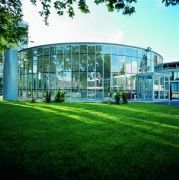 Hall E, popularly called Jurček ("porcini"), was built in five months of the year 1960 (architect Marko Šlajmer); the building is included into the Register of Slovene cultural heritage

The Granary at Remšak, Šmiklavž 32, Institute for the Protection of Cultural Heritage of Slovenia, Celje Regional Office

Headquarters of the Institute for the Protection of Cultural Heritage of Slovenia, Celje Regional Office, founded in 1961 in Celje

Faculty of Arts, University of Ljubljana, 2006

Faculty of Arts, University of Ljubljana, 2008 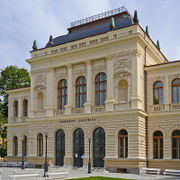 A detail of the facade of the historical building Narodni dom in Ljubljana, built at the end of 19th Century. Today the National Gallery of Slovenia.

Ljubljana Puppet Theatre, 2012. At every full hour puppet of Martin Krpan, famous fictional hero in Slovenian literature, and his mare step out of interesting roof turret with a clock, which was put there in 1987.

Cankarjev dom, Cultural and Congress Centre with a monument to Ivan Cankar (by Slavko Tihec) on the main platform, 2013

Façade of the National and University Library by Jože Plečnik, 2008 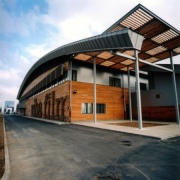 The Czech President at the time, Tomáš Masaryk, appointed Slovene architect Jože Plečnik chief architect for the 1920s renovation of the Prague Castle. Recently the Hradčany south gardens have been newly restored according to Plečnik's plans.

Maribor Public Library unit Rotovž in the centre of the city, 2006 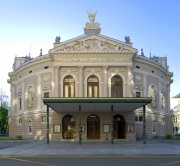