Twinkle Sleepyhead (Zvezdica zaspanka), staged for the first time in 1955 but still in the repertory today.

Prometheus: An apology for a split personality and a chorus of hungry men, based on Aeschylus' Prometheus Bound and Dostoyevsky's The Brothers Karamazov, directed by Simon Belak. Produced by Glej Theatre, 2013. 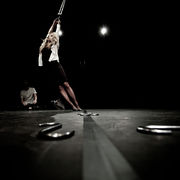 Butcher Shop, conceived and directed by Sabina Schwenner as a musical and physical operation for the dismemberment of everyday questions. Produced by Glej Theatre in 2011.

Performance Ways of love / Une façon d'aimer by artists Maja Delak and Luka Prinčič at the Račka Gallery in Celje, 2010

Strindberg's The Road to Damascus directed by Aleksandar Popovski

The Ana Mraz (Ana Frost) festival is – in a way – the winter edition of the Ana Desetnica Street Theatre Festival. Held across Slovenia and co-organised by various producers, the House! Society takes care of it in Maribor, 2017.

Fran Levstik's Who Made Videk's Shirt puppetry performance conceived by Eka Vogelnik, Ljubljana Puppet Theatre, 2006. The performance had its 400th reprise on 9 November 2014.

Doctor Faustus performance staged in 2005 with the puppets made in 1938 by Milan Klemenčič. Directed by Jelena Sitar, music by Igor Cvetko, produced by Ljubljana Puppet Theatre.

Granny with the drums and Granddad with the lajna instrument, joined by Speckles the Ball who has flown in through the window. The puppets were fabricated by Jan Malik, the performance saw its première at the City Puppet Theatre (today's Ljubljana Puppet Theatre) in 1951 and became immensely popular around Slovenia.

100 Years of the Slovenian Puppetry Art exhibition at the National Museum of Slovenia, International Union of the Marionette (UNIMA), Slovenia, 2014.